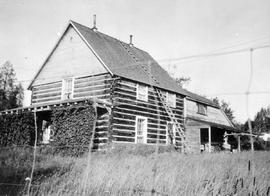 CALL NUMBER: T0305:0001 RECORDED: [location unknown], 1965-03-08 SUMMARY: TRACK 1: Mr. Ernest "Ernie" Fredrick Lang talks about the Keithley Creek area, and recalls his experiences as a German immigrant before World War I. An unidentified woman speaks for about three minutes. Then, Lang describes how he came to Canada in 1912, homesteaded and worked in mines. He mined in the area until 1940. He tells a story about going down Fraser River on a scow and finding a dead man in the mountains. He describes the countryside of the Quesnel Highlands and talks about Bob Borland, Jim Adams and the Mile Tunnel. Then he discusses Mrs. Lee who grazed sheep in the hills before an unidentified man and woman speak again for about three more minutes.

TRACK 2: Lang discusses his background and experiences in Germany, coming to North America, hard times and experiences in New York, coming to Canada as an immigrant labourer, working on a farm near Brantford, Ontario, and coming to BC to work on the Grand Trunk Pacific Railroad. Then he tells a story of a journey through the woods in winter and an elaboration of the story about traveling the Fraser River on a scow.

CALL NUMBER: T0305:0002 RECORDED: [location unknown], 1965-03-08 SUMMARY: TRACK 1: Mr. Lang describes working on a farm near 153 Mile House, incidents evolving out of the language barrier, working for Louis Corsina at 153 Mile House, stories about being a German in Canada during World War I, activities in the area of South Fort George circa 1915, mining at 20 Mile House, mining at Keithley Creek, gold in the old river channels and more on mining up to 1925.

TRACK 2: Mr. Lang describes early gold mining in the area between 1860 and 1880, Jim Adams and the Mile Tunnel at Snowshoe Creek, Keithley Creek, staking claims in the snow, the Barkerville Road, the effect WWII had on mining and economics, gold fever, encounters with bears, settlement at Likely and Quesnel Forks, an encounter with a cougar and his wife's death.

SUPPLIED TITLE OF TAPE(S): Cariboo recollections RECORDED: Williams Lake (B.C.), 1974 SUMMARY: TRACK 1: In an interview with Reg Beck, Spencer Hope Patenaude discusses early Williams Lake, Horsefly, 150 Mile, and 153 Mile House. Bullion Mine described. Telegraph lines in the Cariboo. Anecdotes about telegraphy and the life of a telegraph operator. 150 Mile House pioneers. Chinese in 150 Mile House. Ox teams and freighting on the Cariboo Road. Grist mills and grain growing. Sawmilling. TRACK 2: Description of the engines and workings of the Miocene mine. Anecdotes about maintaining the telegraph lines. [End of interview]