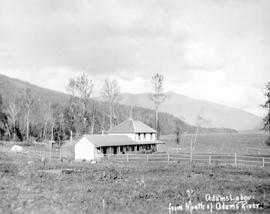 "One of the most spectacular of all salmon runs occurs every four years along the spawning grounds of the Adams River. Extracts from the writings of noted author and conservationist the late Roderick Haig-Brown, follow the life cycle of the Adams River sockeye salmon run, pointing out the hazards and threats to salmon survival with film of spawning, hatching, migration -- and later, the return of the salmon, past the commercial and sports fishermen, through waters threatened with industrial and municipal disturbance, back up the Fraser River and the Thompson River, to their birthplace, which in 1978 was designated as a conservation area and provincial park. Included in this film are scenes of Haig-Brown fishing, the Haig-Brown library, the dedication ceremony to name the park after him, and a thoughtful perspective about the preservation of the resource, narrated in part by Valerie Haig-Brown." (from Qualicum Film Productions flyer, n.d.)

Salmon in the Adams River