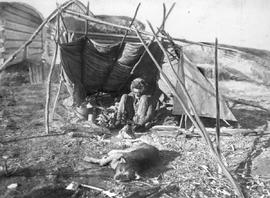 "An elderly Casca [Kaska] Indian, deserted by his people"

SUMMARY: CJVI news commentator Dick Batey interviews Stuart Keate, W.R. McIntyre, and Brigadier C.J. Milly [sp?] on the establishment of Matson Lodge, a seniors' residence in Esquimalt that was built by the Salvation Army on land donated by t...

RECORDED: [location unknown], [1970?] SUMMARY: TRACK 1: Mr. Victor talks about his position as president of the Golden Age Club at the Jewish Community Centre, Vancouver, and about the club's members. He recounts his personal history; his wor...

This series consists of records of the Commission on Welfare Institutions and Nursing Homes, 1939. Records include correspondence regarding the commission, transcripts of proceedings and evidence regarding a particular institution in Vancouver, an...

Commission on the Home of the Friendless (1937)

This series consists of the records of the Royal Commission regarding the Home of the Friendless, 1937. Records include the Commissioner's original annotated report.

British Columbia. Royal Commission re the Home of the Friendless [1937]

Commission to Make Inquiry Into All Matters Concerning the Management of the Provincial Home at Kamloops, B.C. (1903)

This series consists of the report, evidence and exhibits of the Commission to Make Inquiry Into All Matters Concerning the Management of the Provincial Home at Kamloops, B.C, 1903-1904.

British Columbia. Commission to Make Inquiry Into All Matters Concerning the Management of the Provincial Home at Kamloops, B.C. (1903)

The series consists of policy, program, and committee files from the executive director’s office, Continuing Care Division, Ministry of Health, 1979 to 1987. These records document the division’s core function of administering continuing care prog...

Files relating to the Home Support program, a component of the Long Term Care program, including day and subject files of the Provincial Home Support Co-ordinator. The Home Support Program seems to have evolved from the Special Care, Adult Divisio...

The series consists of records created by the Inspector of Hospitals between 1924 and 1952. The records contain case files and correspondence with various hospitals and covers Greenwood, Haney, Duncan, Nelson, Trail, Terrace, Queen Charlotte Isla...

The series consists of records created by the Provincial Home for the aged at Kamloops between 1895 and 1975.The records include registers of inmates from 1899 to 1974; a number of case files, lists, accounts and other administrative material. Th... The series consists of the executive records of Peter Albert Dueck (Minister of Health 1986-1989). The records document a broad range of administrative and operational activities of the Minister of Health’s office in 1989. Some of the subjects co...

The series consists of records created by the Dept. of Health Services and Hospital Insurance between 1953 and 1965.They contain the executive files of the Minister, Eric Martin and include files relating to Woodlands, the Provincial Mental Hospit...

Situation comedy. Feeling taken for granted on his birthday, Daniel moves out, and then is persuaded to return.

Situation comedy. Emma's high school sweetheart shows up at the door, having escaped from prison.

Situation comedy. Four elderly people who meet at Shady Oaks Rest Home plan their escape and move into a house together.

Situation comedy. Four elderly people move into a house together.

SUMMARY: Dick Batey interview and commentary about the funding to establish Matson Lodge, a seniors' residence in Esquimalt .;

This series includes records of the Provincial Home, Kamloops, also known as the "Old Men's Home" from 1920-1975. Records include correspondence with the accounting division, Canada Dept. of Health and Welfare, and patient case file...

Records of the Continuing Care Division

Records pertaining to the Provincial Home, Kamloops, known as the Old Men's Home

The series consists of correspondence, reports, surveys, research material, and meeting minutes and agendas documenting ongoing issues and special research projects into issues affecting seniors. The records were created by the Office for Seniors...