"A tomato crop on a semi-urban ranch close to Victoria on Vancouver Island; the scenery in the background is typical of the southern part of the island which is famous for its climate 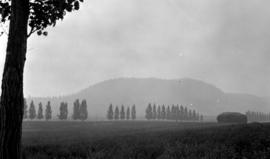 The item is a copy of a thesis on microfiche by Florence Irene Cocking, titled "A comparison of the NDP and Social Credit Agricultural Land Commission policy." vi, 71 p: tables. Thesis (M.A.), University of British Columbia, 1982. Vit...

A day with the Okanagan poultry inspector

The item is a b&w documentary film from ca. 1928. "The Poultry Inspector from the British Columbia Department of Agriculture visits Rose Comb Red Farm and inspects their hens, chicks, cows, pigs and bees. He also visits a Boy's and ... A field of wheat at Cedar Hill, near Victoria, on the farm of the Premier of British Columbia, the Honourable Dr. S.F. Tolmie; young man posed with pitchfork at cut hay

A history of the British Columbia Department of Agriculture / M.M. Gilchrist

The item is a copy of "A History of the British Columbia Department of Agriculture" by M.M. Gilchrist.

A history of the Kitsumkalum Farmers' Institute / Floyd Frank

The file is a history of the Kitsumkalum Farmers' Institute by Frank Floyd, a Terrace dairy farmer.

The series consists of ARDSA reports created between 1976 and 1994 by the Ministry of Agriculture, Fisheries and Food and its predecessor bodies. ARDSA (Agriculture and Rural Development Subsidiary Agreement) was a joint Canada and British Columb...

The series consists of records created by the Agricultural Division of the Ministry of Agriculture, Fisheries and Food and its predecessor body, between 1990 and 1996. The files include final reports, some illustrated with photographs, correspond...

The series consists of eight policy files and reports relating to Agricultural programs of the Ministry of Agriculture, Food and Fisheries, and its predecessor agencies, created from 1975 to 2001. The records have been classified under the Agricu...

This series consists of Agriculture Development and Extension Branch correspondence, memoranda and reports, 1943-1952.

The series contains computer-generated reports of various analyses conducted for the Ministry of Agriculture and their various programs, notably those of the Pesticide Program. The records show how the Ministry was involved in monitoring contamina...

Series consists of public information photographs from the Dept. of Agriculture and its successors. The photos depict a wide range of agricultural activity in the province and were used by the ministry to promote the industry and the work of the ...

This series contains records from the Risk Management and Competitiveness Division of the Ministry of Agriculture and Lands, and later the Strategic Industry Development Branch. More specifically, these records originated in the office of Harvey S...

The series consists of 64 film reels of stories or items (including out-takes from items) dealing with various aspects of agriculture in BC, produced for television broadcast by the Horticultural Branch of the B.C. Dept. of Agriculture, between 19... RECORDED: [location unknown], 1979-02 & 03 SUMMARY: Allan Toop discusses his life as a dairy farmer in the Fraser Valley. The interview begins on the first tape after five minutes of sound effects, including the sounds of mechanized milking eq...

RECORDED: Ganges (B.C.), 1982-01-13 SUMMARY: Father born in Greece, 1853; became a seaman; jumped ship in Vancouver; worked in fishing industry; acquired land on Saltspring and built up a farm. Sheep ranching. Andrew Stevens has been a fisherman; ...