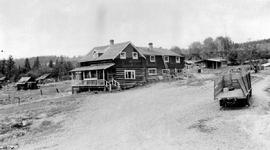 RECORDED: [location unknown], 1967 SUMMARY: Oral history interviews with Dick Church, who came to ranch at Big Creek in 1901 with his father and family; Bill Bliss, who describes his father's ranch at Redstone; and Tommy Lee, who was a storekeeper at Alexis Creek.

CALL NUMBER: T1785:0001 RECORDED: [location unknown], [196-] SUMMARY: TRACK 1: Mr. Elmer Purdue tells a story about hunting near Soda Creek and eating a groundhog; when he first met the Bryant family; a story about a mean old timer named Lou who attacked Mr. Purdue; people in the area; Bull Canyon; his first impressions of Cyrus Bryant who was fixing an out-of-tune piano; Mr. Madden who lived near Soda Creek; working at Gang Ranch; the Bryant family as he remembers them; and what his life was like when he met them. TRACK 2: Mr. Purdue continues by describing when the Bryant family arrived at Tatla Lake on Christmas; the trail from Alexis Creek to Bella Coola; Benny Franklin; more stories about life with the Bryant family at Tatla Lake; differences in the personalities of the Bryant children; stories about the children; hunting in Tatla Lake; working odd jobs for food.

CALL NUMBER: T0368:0001 RECORDED: [location unknown], 1964-07-27 SUMMARY: TRACK 1: Mr. Gabriel T.L. Bayliff talks about his father's experiences in the Chilcotin and various aspects of life in the region. The interview begins with a discussion about how Bayliff's father came to BC and his early experiences on ranches in the Nicola Valley. He worked for Bill Roper at Cherry Creek. His father wrote a paper on ranching. Mr. Bayliff describes the people of the Chilcotin. His father teamed up with Norman Lee to start a ranch in 1887. There is talk of the local Indians, Alexis Creek, Ashcroft, his parent's marriage and his mother's reaction to the country, the Hamilton family and young British people in the area.

TRACK 2: Mr. Bayliff discusses play and work, travel and the mail service. He mentions Benny Franklin, a well-known early settler. He goes on to discuss the acquisition of land, Graham and his ranch at Tatla Lake, gold prospecting, stories about Chinese settlers, Becher's stopping house at Riske Creek and his father's experience on a pack train.

CALL NUMBER: T0368:0002 RECORDED: [location unknown], 1964-07-27 SUMMARY: TRACK 1: Bayliff comments on Norman Lee's ranch near Redstone. He explains the place names of: Bull Canyon, Chilco and Chezacut. He discusses the Indian battle at Bull Canyon and "Salu's leap". He talks about people killed by Chilcotin Indians, the Hance family, and purchases of local cattle during the building of the Grand Trunk Pacific. [TRACK 2: blank.]

RECORDED: [location unknown], 1964 SUMMARY: TRACK 1: The interview begins with the story of Mr. Blenkinsop's arrival from England in 1907. He discusses his work at the Chilco Ranch, raising horses at Farwell Canyon, ranching on Big Creek and the growth of Chilco Ranch and the development of ranching in the area. He describes some of his experiences driving freight wagons and catching wild horses. He tells stories about Mr. Church, a horse hunter, other settlers in the area, local Indians, and Norman Lee of Alexis Creek. TRACK 2: Blenkinsop discusses the sales of cattle, Becher's stopping house near Riske Creek, cattle drives, and the Cotton Ranch.

RECORDED: [location unknown], [1973?]
SUMMARY: TRACK 1: Jean Mark recalls her experiences as a school teacher at Tatla Lake in the Chilcotin, 1928-29. She also discusses Phyllis Bryant Kellis and her children (the Bryant family); Leonard Butler; the school building; the Bellamy girls; Cyrus Bryant and his father, Frank Bryant; description of the Bryant's cabin and furniture. TRACK 2: The Bryant children also went to school in Vancouver (1927) and in Williams Lake (after 1929). The seasons and scenery at Tatla Lake; the Bryant's vegetable garden; the story of Phyllis's piano; felt lonely at Tatla, and took trip to Williams Lake and Clinton with Claire Gilliland; Quesnel Dam; dancing and singing at Tatla Lake; mail days; discarded books shipped to Tatla School from a library; descriptions of the Bryant children and their activities; prayers at school. [End of interview]

RECORDED: [location unknown], 1967 SUMMARY: An oral history interview with Kathleen Telford about her life and family history in the Chilcotin. Her father, Alex Graham, left Ireland in 1886, and settled in B.C. at Alexis Creek (the CI ranch). Other settlers. Ranching in the Chilcotin. Childhood memories: riding; schools; changes in the Chilcotin.

This series consists of photocopied reasons for judgement of his honour Judge C.C. Barnett, Regina vs. Francis Raines, in the Provincial Court of British Columbia holden at Alexis Creek, 11 October 1978.

RECORDED: [location unknown], [1965?] SUMMARY: TRACK 1: Mr. Roy Haines describes stagecoach driving in the Chilcotin before 1930; the road between Meldrum Creek and Alexis Creek; the Becher place; more on the Chilcotin Road; the people; what Alexis Creek was like between 1912 and 1930; anecdotes; Bull Canyon; anecdotes regarding experiences as a stage driver; the region in the past as compared to the present. Mrs. Phyllis Bryant Kellis is present during this interview and adds some comments. TRACK 2: Mr. Haines continues by discussing the Bryant family; repairing the telephone line; the stage line; deaths; Phyllis Bryant; a physical description of the Chilcotin Road; the past in comparison to the present; the development of the Chilcotin stage lines; Tommy Hodson; and the road from Meldrum Creek.

RECORDED: Kamloops (B.C.), 1981-09 SUMMARY: Mr. Gibbs worked as farm labour on the prairies until he moved to BC during the Depression. He had a small ranch at Forest Grove before joining the Forest Service. He was a ranger at Alexis Creek for many years.

RECORDED: Alexis Creek (B.C.), 1981-09 SUMMARY: At the time of this interview, Mrs. Fletcher and her husband were living on part of the Norman Lee Ranch near Alexis Creek. Their family had grown and started families of their own.;

RECORDED: Alexis Creek (B.C.), 1981-09 SUMMARY: Mr. Graham took over a large cattle ranch from his father and ran it for many years in the Alexis Creek area.;