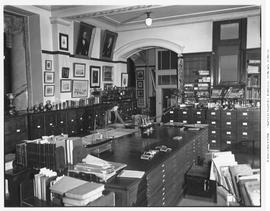 "Archives Department Exhibit Room, 1949", shows one of three well lighted rooms allotted to the Provincial Archives in its former location in the parliament buildings The item is a microfiche copy of a thesis by Rosemary Alice Brown titled "A critical bibliography of the Maltwood Archival Collection." 1978. iv, 102 leaves. Thesis (M.A.), University of Victoria, 1978. Vita. Bibliography: leaves 4...

Series consists of a draft and revised draft of Russell's reminiscences of her career as a librarian in the Provincial Library; correspondence inward (1 item), 1924; certificates of membership (B.C. Library Association, Order of Good Times); ...

Series consists of records management studies. Includes studies about the establishment and organizational structure of the records management programs in the British Columbia government (including the 1981 Acton "Records Management Study&qu...

Dust gets in your eyes : the world of archives

Magazine. The series "Island this week" was a Sunday program that focused on people, events and activities on Vancouver Island. This episode includes a feature about the Sound and Moving Image Unit and the Visual Records Unit at the BC ...

Looking down the years at random

RECORDED: Victoria (B.C.), [1991?] SUMMARY: In an interview with Fran Gundry, Madge Wolfenden discusses her career as a librarian and archivist at the Provincial Library and Provincial Archives of British Columbia. Madge Wolfenden Hamilton (1893-1...

This series consists of a memorandum to John Hosie, Provincial Archivist, enclosing a report of the Auditor of Revenue to the Comptroller General concerning an investigation of the Archives, dated 1931.

Towards an understanding of the municipal archives of nineteenth century British Columbia: a case study of the archives of the corporation of the city of Nanaimo, 1875-1904. xi, 395 pages: map, figs., tables. Essay, University of British Colum...

Outgoing correspondence of the Provincial Archivist and Librarian to Ottawa

Correspondence and questionnaires from members of the Legislative Assembly of British Columbia about the disposition of their personal papers and/or ministerial papers.Presented by G. Price in 1977. This series contains central correspondence files, ca. 1909-1979 (a few files date from as early as 1899 and a few continue until 1986). The files contain correspondence inward to Provincial Archivists and archives staff from researchers, histori...

The Department of Provincial Archives and Northwestern History; Victoria

SUMMARY: Talk by Violet Wilson about the history of the Provincial Archives of British Columbia.

News item. Victoria's city archivist, Ainslie Helmcken, talks about improvements to the city archives. These include: (1) access to much more material; (2) a larger storage area; (3) encouragement for more public input; and (4) access to a...