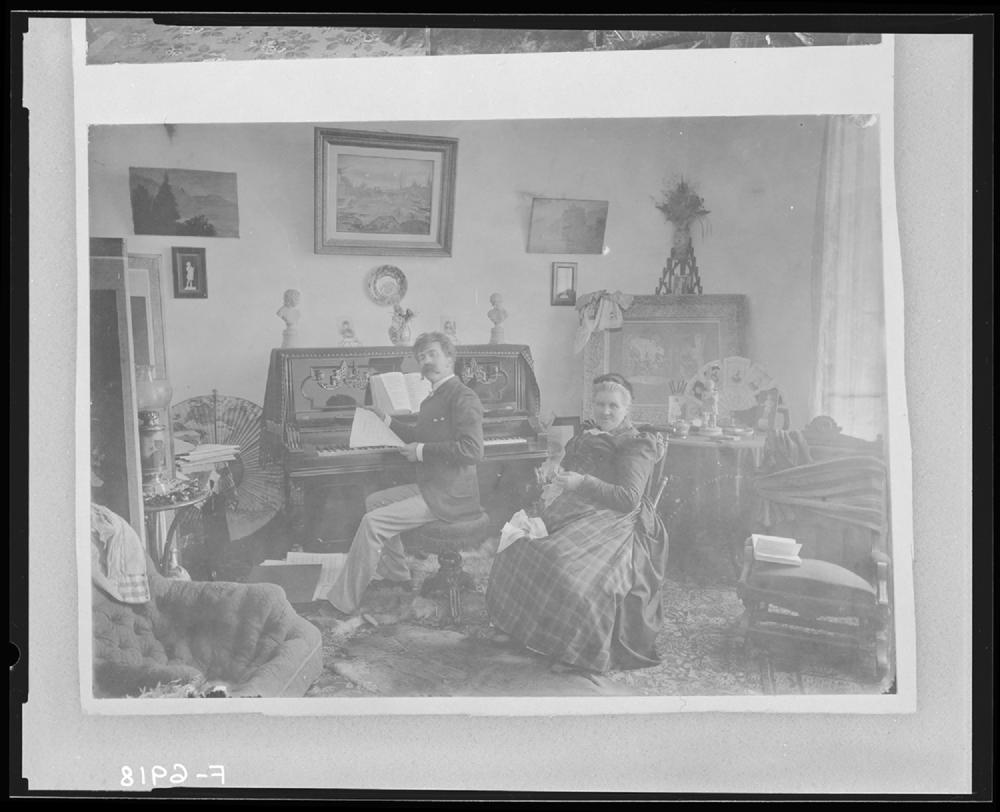 This album was loaned to the Archives, Visual Records Department in February-March 1980 by Mrs. Blake Croft.

There are some image captions found on corresponding album pages. The image of the construction scene includes the caption “Chinese rebuilding New Westminster”; the image of the unidentified photographic studio occupied with a man posing in a portrait studio includes the caption “Wandering Jew…” There does not appear to be associated photograph numbers for the original negatives present on album pages or prints, or studio stamps or imprints on the prints themselves. The original album is noted to have contained views pertaining to Victoria, Saanich and Vancouver in British Columbia and Texas in the United States, contained in twenty-eight pages.

Originals were held by Mrs. Blake Croft as of February-March 1980.

For related materials relative to alternative prints versions of the Maynard family and Mrs. R. Maynard’s Photographic Gallery, including the portraits of Hannah Maynard (HP#068253) and Richard Maynard (HP#003551) featured in the subject matter of one of the photographs in this album (F-06918), see the BC Archives Photograph Collection.

Laura Lillian Maynard (1873-1951) was the child of George Maynard and Mary Elizabeth Davies. Laura was a stamp vendor in Victoria for a significant amount of her working life and career. Her siblings included Mrs. Rose E. MacDonald, William, as well as Albert J. and George H. Maynard of Maynard & Sons auction and appraisal company. Her nieces (children of Rose E. MacDonald) include Mrs. Lemon and Mrs. Croft. Her cousin is Harry Hatherly MacDonald, son of Emma Maynard and James MacDonald.

Additional documentation (Maynard family research files) regarding the records in this series are available. This material was created by current and past staff and researchers of BC Archives and includes biographical, contextual, and photographic research information. Local newspaper clippings and magazine articles, as well as city directory listings containing information on Maynard family members and Arthur S. Rappertie, are included here. Please contact the BC Archives to determine the access status of these records.

Prints were made from negatives taken of the original photograph album. Negatives capture both the photographic print and album pages.