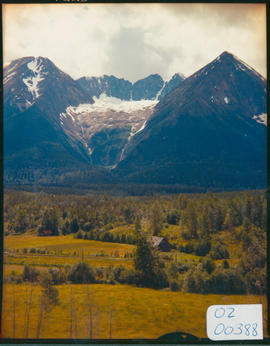 Series consists of colour photographs taken by staff photographers in the Special Services Branch and its predecessor bodies, the Film and Photographic Branch and the Photographic Branch ca. 1966 to 1982. The photographs were taken mainly to illustrate Beautiful British Columbia magazine, a publication produced by the Ministry of Tourism, but could also be used for a variety of other publications and presentations. The photographs were taken using colour film. Prints were made from the negatives and were pasted into large albums for reference purposes. They were arranged by a classification system which consisted of a region or subject group number followed by an image number. These images cover all areas of the province and depict natural scenes as well as towns and cities, individuals, groups, animals and plants. For indexes to these photographs, see the related series: Indexes to Beautiful British Columbia magazine photographs.
In addition, most of the albums contain a copy of the index for that particular region or subject group. These copies are tucked in a pocket inside the front cover of each album. A reference copy of all the album lists is available in a binder stored with the old photo reference binders, ask for it at the retrievals desk.

Transferred by the Ministry of Tourism in 1995.

There are gaps in the records, not all negatives created had prints made.