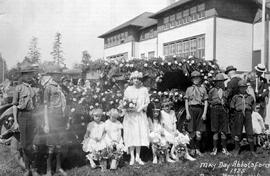 Between ourselves : The riverboys and the fur traders : [parts 1 & 2]

SUMMARY: "Between Ourselves" was a weekly series of hour-long radio programs that presented Canada to Canadians. It featured aspects of Canadian life in docudramas, plays, music, and interviews, originating fr;om different regions of Canada. The series ran from 1966 to 1979. "The Riverboys and the Fur Traders", presented in two parts, is the story of a river journey made in 1971 by the First Fort George Sco;ut Troop. The scouts were retracing the route followed by Simon Fraser in 1806, and (in part) by Alexander Mackenzie in 1793 -- from McLeod Lake to the Fraser via the Parsnip, Pack and McGregor Rivers;. The program combines excerpts from the journals of Mackenzie and Fraser with recordings made by Imbert Orchard during the course of the scouts' journey. The program also juxtaposes sounds from a var;iety of sources. Roy Brinson is heard as the voice of Simon Fraser, and Robert Clothier as Alexander Mackenzie.;

RECORDED: James Creek (B.C.), [196-] SUMMARY: TRACK 1: This tape captures the sounds of a Boy Scout trip on James Creek in the Prince George area. Imbert Orchard interviews various scouts concerning their thoughts about the trip. TRACK 2: Sounds of a Boy Scout trip are continued. Included is a story about the English civil war, told around the campfire. Sounds along the river are continued. 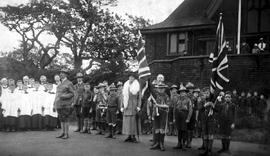 Boy Scouts of the Gonzales troop on parade in Oak Bay

Boy Scouts of the Gonzales troop on parade in Oak Bay

Colour bearers of the Boy Scouts. 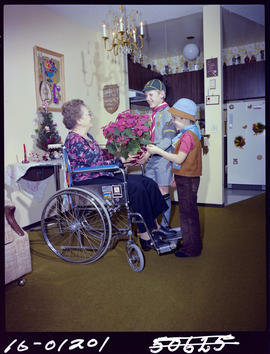 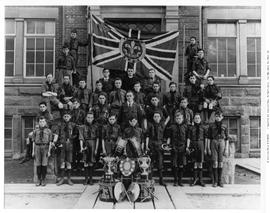 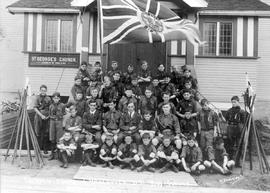 For all we have and are

Amateur film. A propaganda film, made in the early days of the Second World War. Opening with footage of a giant Empire Youth Rally at Brockton Point Oval, the film illustrates Canadian democratic values, institutions and ideals which are now threatened by fascism and war -- farming, industry, the home and family, education, racial tolerance, elections, and religious freedom. Also includes footage of First World War memorials in Vancouver and Victoria, cemeteries, Remembrance Day ceremonies and parades, and veterans. Canada's contribution to the war effort is shown through shots of recruiting stations, marching recruits, military parades, warships, etc. One lengthy sequence uses model airplanes, dramatizations, stock shots, photographs, and footage of local civil defence drills to simulate the impact of aerial attacks on British cities during the Blitz (including civilian casualties and damaged or burning buildings).

Amateur film. Girl Guide and Boy Scout activities, including an outing to see King George VI and Queen Elizabeth during their 1939 visit to Vancouver.

Amateur film. Boy Scouts, Girl Guides and adult leaders arrive by streetcar at Vancouver or Victoria park, where they parade, form a square, and undergo inspection. 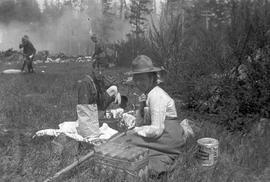 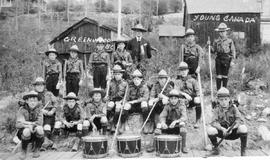 Greenwood Boy Scouts; One Of The First Packs In Canada.

IODE float; Victoria Day parade and celebrations for the 250th anniversary of the Hudson's Bay Company 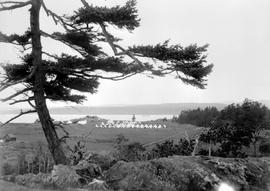 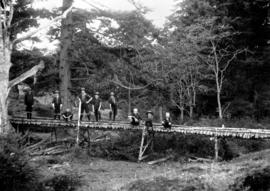 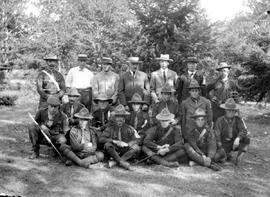 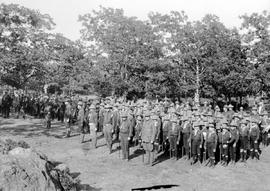 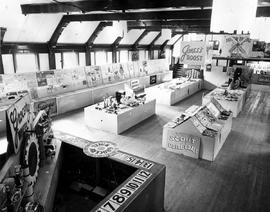 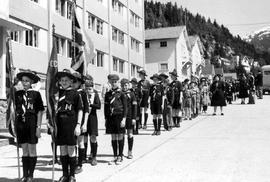