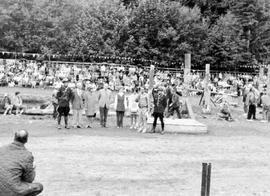 The item is a film print of special event coverage. To commemorate the hundred years since British Columbia joined the confederation of Canada as a province, the ten provinces and two territories each sent a seven-man crew into the B.C. interior for a nineteen-day sojourn over some 817 miles of provincial waters. The purpose was to draw attention to the challenge of Canada's outdoors and canoeing, and at the same time retrace the past routes followed by explorers. Travelling in twenty-five Norwester canoes, the flotilla began its journey from Fort St. James and concluded at Victoria's Inner Harbour.

The item consists of a documentary film on four reels. It depicts Centennial celebrations throughout 1971, including the visit by Queen Elizabeth.

SUMMARY: "CBC Mid-Week" is a program of miscellaneous commentary and music. This episode, "Centennial Journey", is a record and commentary, by Andreas Schroeder and Jeremy Long, of a journey through British Co;lumbia, sampling the opinions and feelings of young people about living there in 1971 -- the Centennial of B.C. becoming a Canadian province.;

SUMMARY: A presentation of music by Vancouver composer Elliot Weisgarber, inspired by the B.C. landscape. Comprises: (1) "The Land of Astace", a prelude and three interludes interpolating three Carrier Indian ;legends; (2) "Chilcotin Interlude"; and (3) "The Ultimate Islands", a prelude and three interludes for string quartet, plus two segments dealing with natural sounds. The music was commissioned by the ;CBC to mark B.C.'s Centennial (1971), and performed by an 11-piece ensemble conducted by John Avison. The program includes discussions of the work by the composer, the conductor, and Imbert Orchard, w;ho produced the program at CBC Vancouver. Other voices heard include Maxime George and Lizette Hall.;

The item consists of a reel of film footage and accompanying magnetic track. Assembly of mixed film material (possibly related to a set of television commercials) prepared for the 1971 Centennial celebrations. Footage includes B.C. natural scenery, historic photographs, industries and cities in B.C., and other subjects.

Characters of our century : [tape 3]

Characters of our century : [tape 4]

Characters of our century : [tape 5]

Characters of our century : [tape 6]

For this is British Columbia ; Summer dream

SUMMARY: "For this is British Columbia" was performed on the occasion of the Royal Visit to Victoria in 1971; "Summer dream" is another song composed by the same artists.;

SUMMARY: The official song to commemorate the province's 1971 centennial. Words and music by Bobby Gimby. SIDE 1: Vocal version by The Pied Piper and the British Columbia Kids. SIDE 2: [Instrumental version;?] by the Centennial '71 Band.;

SUMMARY: The official song to commemorate the province's 1971 centennial. Words and music by Bobby Gimby. SIDE 1: Vocal version by The Pied Piper and the British Columbia Kids. SIDE 2: [Instrumental version;?] by the Centennial '71 Band.;

RECORDED: Vancouver (B.C.), 1971 SUMMARY: Mr. Len Stacey and Mr. Les Leighton discuss a centennial project of the Rajah Shrine Club involving a special stage coach journey from Barkerville to Vancouver. Mr. Stacey describes the project. Mr. Leighton, a former BX Company stage driver, comments on his experiences. Mr. Stacey explains how the funds raised will be used and talks about his background and retirement; ideas for what retired people can do to contribute to young people. Mr. Leighton discusses the camels brought to the Cariboo in the 1880s.

The item is a reel of film out-takes from ca. 1971. Well-shot footage of a logger sports events at Gold River, possibly marking the B.C. centennial in 1971. Includes footage of speed chopping, pole climbing, pole sawing, log rolling, bucking, and axe-throwing, as well as shots of the crowd and of children cooling off in the log-rolling pond. This footage was selected from the out-takes of the BC government travelogue "Island Eden."

SUMMARY: Radio program following a flight of two CF-104 Starfighter jets along the route of the C.P.R. from the Alberta border to Patricia Bay Airport on Vancouver Island. The pilots report in-flight progress via radio. Dan Gallacher, Curator of Modern History, Provincial Museum, and Imbert Orchard, CBC broadcaster and oral historian, provide commentary. The aircraft are code-named "Century One" and "Century Two".

The series consists of newspaper clipping books created by the Centennial '71 Committee between 1969 and 1972.

SUPPLIED TITLE OF TAPE(S): Ray Orchard interview PERIOD COVERED: 1931-1978 RECORDED: [location unknown], 1978-01-26 SUMMARY: TRACK 1: An interview with Ray Orchard, Director of Provincial Information at the Ministry of the Provincial Secretary and Travel Industry. Orchard discusses: his childhood and education, the role of Lawrie Wallace on his life, going to Vic High, driving across Canada, working in radio and plays in England, getting married and moving back to Canada. Orchard then turns to his role in the 1971 centennial, and working for the Ministry of the Provincial Secretary. Discusses changes in the civil service when the NDP took over in 1972. Clare Copeland selling the provincial government time on the radio station CFAX. Ron Worley, an aide to W.A.C. Bennett, suggested Orchard be the voice of the government in the radio commercial. Commercial was called "Ask Your Provincial Government"; ran 5 times a day on Saturdays and Sundays. Difficulty in editing ministers responses; Orchard wanted the commercials to be informative, not just advertisements for the Social Credit Party. TRACK 2: Orchard continues discussing his role in the Ministry of the Provincial Secretary: Lawrie Wallace retained as deputy minister; Orchard's "Ask Your Provincial Government" was ended; duties he was responsible for as director of public information and personnel. Orchard says he has always been a generalist, so he liked the challenge of doing different things in the ministry. Discusses working with Mrs. McCarthy, Wayne Currie; satisfaction with the eventual split between the public information and the personnel roles; the new Socred government. (End of interview)

The item is a film print which shows a dramatization of events surrounding British Columbia's entrance into Canadian confederation.