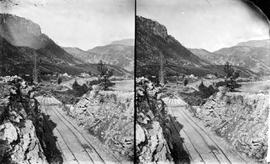 Hannah Hatherly was a well-known photographer, photographic artist and business owner originally from Cornwall, England. She ran a successful commercial photography business, Mrs. R. Maynard’s Photographic Gallery (1862? – 1912) in Victoria on Vancouver Island, a business that was in operation for 50 years. Richard Maynard was a well-known British Columbia photographer, prospector, and business owner originally from Cornwall, England also based in Victoria, British Columbia. Hannah and Richard married in 1852 in England and they immigrated to Bowmanville (Ontario). Hannah and Richard had several children in Bowmanville and later in Victoria.

The Maynards lived first in Bowmanville then the family moved to Victoria in 1862. It is believed Hannah Maynard opened Mrs. R. Maynard’s Photographic Gallery that same year. Richard Maynard followed his prospecting enterprises on the mainland before and after the family’s move to Victoria. He later settled and opened up his own business there. Richard and Hannah Maynard remained in Victoria throughout their lives, though they both travelled extensively including British Columba and the United States through their work as photographers. The Maynards created an extensive documentary record capturing some of the earliest views and portraits of British Columbia in the early decades post Confederation.
The Maynards had several children. Those who survived past childhood and early adulthood included George Maynard (1852-1926 or 1927), Albert Hatherly Maynard (1857-1934) and Zela Maynard (1854-1913). Several of their children died young, including Laura Lillian Maynard (1867-1883) who died at age 16 and Emma Maynard (1859 or 1860-1893) who died while in her thirties.

Richard Maynard, known for his field and landscape photography, made one of his early work-related excursions to Barkerville with his son Albert Maynard in 1868. In the census records of 1881, Emma Maynard is listed as a photographer. Frequently family members have featured in Hannah Maynard’s studio portraits as well as her more experimental and autobiographical works, tableaux vivants, which employ double and multiple exposure techniques along with the techniques of photo-sculpture. Featured family members include daughters Emma Macdonald (nee Maynard) and Laura Lillian Maynard, as well as Emma’s sons Harry Hatherly MacDonald and Maynard Macdonald. Upon Mr. R. Maynard’s retirement in the late 1890s, Albert took on the role of general manager of his father’s business as well as taking over management of the photographic stock. After the death of Hannah Maynard, Albert was the executor of his mother’s will.

Series consists of 545 photographs of the Canadian Pacific Railway (C.P.R.), thought to be taken by Richard or Hannah Maynard. In 1880-1881, Richard Maynard was hired to document the construction of the C.P.R. but photos within this series may have been taken at later dates or by other photographers. Images depict trains ("rolling stock"); views of locations along the construction route, including rivers, bridges, and mountains; tracks and construction in progress; wrecks following accidents; snowsheds; and portraits of workers.

Some glass plate negatives are broken.