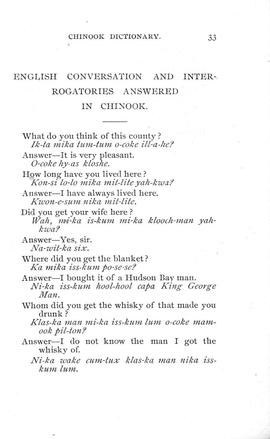 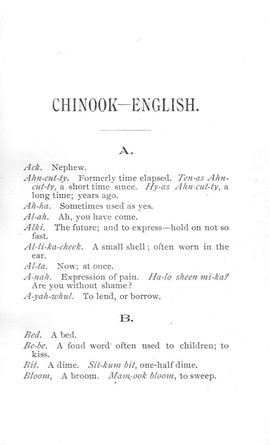 CALL NUMBER: T0678:0001 RECORDED: [location unknown], 1965-10-25 SUMMARY: TRACK 1: Miss Annie York describes her grandfather, Joseph York (1868?-1951), who attended Anglican schools at Jackass Mountain; his lifelong work for the CPR; several anecdotes about things that happened to him during his lifetime; his character; Spuzzum Indians; Indians in Lytton; how Spuzzum got its name; Harry James; events in Spuzzum; Indians of Spuzzum; basket weaving; Spuzzum Indian chiefs; the Chinook language; languages used in church; she recites the Lord's Prayer and some hymns in her native tongue, Thompson Indian. TRACK 2: Miss York sings a bit more and discusses the hymns; Reverend Higgs; anecdotes about family; her great grandmother; her grandmother; her mother; her partner, Mr. Palmer; Chief James; Thompson Village. She tells the story of the Lytton Indians and Simon Fraser as told to her by her grandmother, who was ten years old at the time of the meeting, and sings the song that was sung to Simon Fraser when he left the Indians. More on Simon Fraser; more on hymns and prayers; teaching.

CALL NUMBER: T0678:0002 RECORDED: [location unknown], 1965-10-25 SUMMARY: TRACK 1: Miss York continues by discussing how Indians prepare food. Then Arthur Urquhart, who was born in Yale and moved to Spuzzum, describes his earliest recollections about his family; his father; people in the area; Chinese people; what people wore; what Spuzzum was like. TRACK 2: Miss York comes back on and tells stories that Chief James told her, and describes his life; bridges and settlements in the area; customs of the Indians; more on cooking; more stories about social customs; her father; Indian religion and beliefs; the origins of the river and the moon.

Bibliography of primary and secondary sources on the Chinook jargon

The item is a copy of a bibliography of primary and secondary sources on the Chinook jargon by Samuel Johnson.

CALL NUMBER: T1062:0002 RECORDED: [location unknown], [196-] SUMMARY: TRACK 1 & 2: Mr. Maxime George continues to tell old stories in Carrier, including stories about Astace. In English, he recalls his boyhood; the advent of deer and moose to the region, and their value; as food. He describes the native reaction to the first white men, and how they discerned that "whites" were human. Mr. George attempts to calculate his age; then he describes his employment deliver;ing supplies for survey crews of the Grand Trunk Pacific Railway. Then he tells the story of Simon Fraser from the Native perspective. [60 minutes]

CALL NUMBER: T1062:0004 RECORDED: [location unknown], [196-] SUMMARY: TRACK 1 & 2: Maxime George and Mrs. George discuss a subject in the Carrier language, and then Maxime George speaks by himself for the remainder of the tape. [60 minutes]

CALL NUMBER: T1062:0005 RECORDED: [location unknown], [196-] SUMMARY: TRACK 1 & 2: This tape begins with a discussion between Imbert Orchard, Mrs. George and Mr. Maxime George about the latest [1960s] style of women's wear and hair. Then Mr. George tells a story in Carrier about Francis [Francois?] Lake, with his wife adding comments. Then, in English, Maxime talks about how his grandchildren do not understand their own language. He repeats the story of his job on a; pack train, supplying the surveyors of the Grand Trunk Pacific Railway. He discusses travel by canoe and scow; and his marriages. Orchard and George discuss the packer Cataline (Jean Caux) and the us;e of French by Hudson's Bay Company workers. Mr. George sings several songs in Chinook and explains their meaning. He relates a Carrier legend in English, then another in his native language. His wife; talks about the relationship between listener and story teller. [60 minutes]

CALL NUMBER: T1715:0001 RECORDED: [location unknown], [1974?] SUMMARY: Mrs. Nancy Joseph, speaking in a Native language which is most likely Carrier; offers various stories about Astace. At the 55-minute mark, Imbert Orchard asks in English when these stories were told,; and a translator tells him that the stories were told in the fall season. Then Orchard confirms which Astace stories she had told, and asks her to tell another, which she does.

CALL NUMBER: T1715:0002 RECORDED: [location unknown], [1974?] SUMMARY: Nancy Joseph continues her dialogue. At the 32-minute mark, Imbert Orchard asks Mrs. Joseph to sing a song in Chinook, which was sung whenever a priest would arrive.

CALL NUMBER: T2181:0001 track 1 RECORDED: [location unknown], 1969-09 SUMMARY: TRACK 1: Joe Abel of the North Okanagan Indian Reserve sings Okanagan Christmas carols. His daughter, Mary Abel, translates the text (some of which is in Chinook, Okanagan, or French), and she talks ;about Okanagan Christmas celebrations. She also speaks about church traditions in the Okanagan area, and early missionaries like Father Parizeau.

CALL NUMBER: T2181:0001 track 3 RECORDED: [location unknown], [1969-09?] SUMMARY: TRACK 3: This tape begins with an unidentified female singer, singing a version of the Okanagan Christmas carol, and continues with Mary and Joe Abel. The latter portion seems to be a copy of their discussion on the earlier tape (i.e., track 1, above).

Prayers and hymns in Okanagan and Chinook

CALL NUMBER: T2140:0001 track 1 RECORDED: [location unknown], 1966-05-09 SUMMARY: TRACK 1: Father T.R. Cullinan, O.M.I., sings two hymns in the Okanagan language, followed by the French hymn "Behold the Lamb of God"; "Goodnight Mary" in Okanagan; and recites the prayer "Hail Mary"; and the Catechism in Okanagan. Two hymns in the Chinook jargon are sung: "St. Joseph" and "To Our Blessed Lord". Father Cullinan discusses the Chinook jargon and translations used by the clergy.

CALL NUMBER: T2140:0001 track 2 RECORDED: [location unknown], 1961-08-17 SUMMARY: TRACK 2: An unidentified announcer states that Margaret Holding was recorded at Spectacle Lake, Loomis Road, on August 17, 1961. The following prayers and hymns are recited or sung in the Okanagan language: "The Lord's Prayer", "Hail Mary", "Glory be to the Father", and several communion hymns. A Chinook hymn sung on Good Friday is heard; a hymn for the dead is sung in the Okanagan language, followed a hymn that follows the benediction. Two more prayers, the Ten Commandments, and other hymns are also included.

The item consists of an audio disc (sound disc) of songs sung by Mary Moon (Frank), recorded by Mildred Valley Thornton in 1953.
Disc summary: taken from accession file.
Side 1: