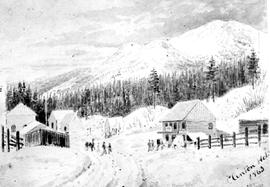 Winter scene. Hotel and other buildings. People on road and in front of hotel. 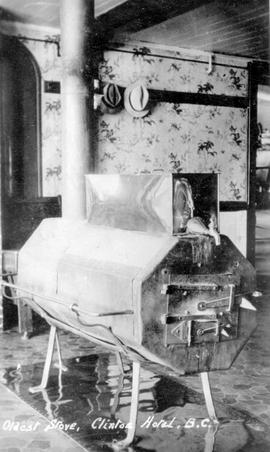 RECORDED: [location unknown], 1964 SUMMARY: TRACK 1: Mr. Antoine Boitano talks about some aspects of the Cariboo, from 1880 to 1910. He discusses his family background, his father Augustine Boitano, the packer Jean Caux ("Cataline"), hi...

Between ourselves : The Bryants

SUMMARY: "Between Ourselves" was a weekly series of hour-long radio programs that presented Canada to Canadians. It featured aspects of Canadian life in docudramas, plays, music, and interviews, originating fr;om different regions of Can...

RECORDED: Clinton (B.C.), 1981-09 SUMMARY: Mr. Robertson was one of the first forest rangers in BC. He was born in Clinton and spent most of his career there.; Tourists in Pontiac driving down street past Frontier Hotel.

Showing "Dominion House" owned by A.B. Ferguson, on the left and ox team on road. Shows streets and surveyed lots. This copy cropped and annotated to show Robert Watson's pre-emption and his lots in Clinton allegedly mistakenly sold at public auction.

The series consists of bills of sale, chattel mortgages, correspondence and related court documents for cases heard in the Clinton County Court between 1888 and 1930. The series is arranged chronologically and by case number and covers civil dispu...

The series consists of orders and judgments created in Clinton County Court between 1972 and 1975. The series also consists of one index volume. The records include cases related to payment of wages, mechanic’s liens, and small claims. This volu... 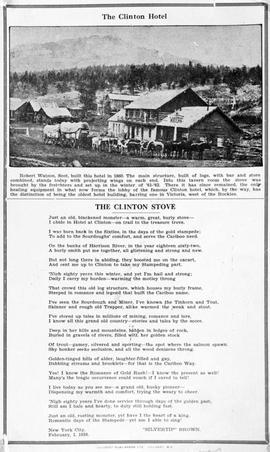 Copy of published photo of hotel with ox team and covered wagons (see A-00436), short history of hotel and its tavern and stove, and poem "The Clinton Stove" by "Silvertip" Brown, New York City, Feburary 1, 1938. 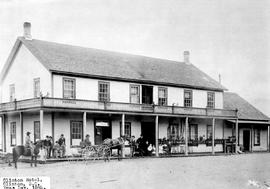 Family and others standing outside hotel. Tourist on horseback in front of hotel. Cars parked in front of hotel.