The fonds consists of the records of the British Columbia Cement Company and mainly relates to the company cement plant at Bamberton, B.C. Other locations of company activity and the creation of records were Tod Inlet in Saanich, B.C., Texada Island, B.C. and the Vancouver Island locations of Cobble Hill and Horne Lake. The records were created ca. 1900 to 1982, though predominantly after 1950. The fonds includes records from the 1960s and 1970s when the company became a subsidiary of Ocean Cement Ltd.

A large number of the records (including textual materials, technical drawings, maps and photographs) were generated by the activities of cement production. These include records related to quarrying; rock and materials handling; the kiln, dry mill and wet mill operations; the electrical department; the purchase and consumption of fuel including coal and oil; cement packing; chemical testing, quality control and research; the sale and shipping of cement; the purchase, operation and maintenance of equipment, and environmental monitoring. Records were created in departments of the plant including the laboratory, by the plant chemist and research and quality control staff, at the quarries, the wet mill, the dry mill, the mixing department, the kiln department, electrical department, and the cement packing plant. Other company activities that generated records include mineral exploration, property acquisition and appraisal, and the transition to closing the plant. There are relatively few records from before the 1950s.

The records were also generated by routine business activities including company administration, corporate planning, annual reporting, union agreements and labour-management relations, budgeting, auditing and financial issues, personnel and staff training. Records were created by company executives, by staff in the plant main office, by the plant manager, the plant engineer, the purchasing agent and personnel manager.

A relatively small number of records were inherited from predecessor companies. These include records which originated with the Vancouver Portland Cement Company Limited, founded by Robert Pim Butchart, which produced cement at Tod Inlet. Some records originated with the British company, the Associated Portland Cement Manufacturers (London) and its subsidiary, the Portland Cement Construction Company Limited, which purchased the land and built the Bamberton cement plant ca. 1911-1913.

Records concerning Tod Inlet include photographs ca. 1905-1913, of the first arrival of machinery and early photos of the cement plant. There are also plant technical drawings and maps relating to the Tod Inlet area, and textual records concerning B.C. Cement Company's continuing ownership of property in Saanich. Records for the Bamberton plant and townsite date from 1911; these include photographs of historic value of the first development on the site in 1912-1913. Many photos were taken by professionals, and it appears they were created and maintained by company staff in order to document the history of the company. Records for Blubber Bay on Texada Island (ca. 1929-1949) include photographs, textual material, and technical drawings. Records relating to Cobble Hill, B.C. (ca. 1950-1975) relate to investigation for mineral deposits, company property holdings, mapping, quarry operation, and the building of the private haul road from Cobble Hill to Bamberton.

The fonds also consists of records for locations where the company owned properties or carried out exploration for minerals, aerial photography and mapping. These include Davies Bay on Texada Island, and Vancouver Island locations including Horne Lake, Deep Bay, and Harris Creek in the Cowichan Valley.

The records include a history of British Columbia Cement Company by a long-time company employee, Robert H. (Bob) Moffatt. It was researched, written and updated between 1976 and 1981. 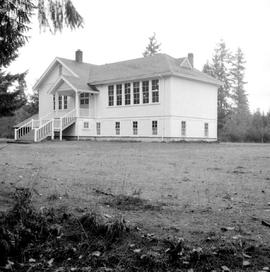 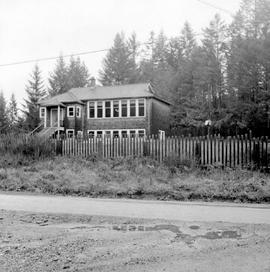 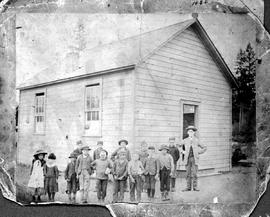 CALL NUMBER: T1085:0001 RECORDED: [location unknown], 1964-11-12 SUMMARY: TRACK 1: Mr. Paddy Acland remembers a few anecdotes about hunting and hiking in the BC interior. He explains how he came out to British Columbia from England after serving with the British Army duri;ng the Boer War. He describes expectations of life in BC and offers comments on the background of his father, John Acland. He arrived in BC in 1908; he describes the appearance of Summerland. He discusses his first jobs in the Okanagan; building his first log cabin; an anecdote about digging a basement for "Old Johnson"; buying and pre empting land in the Okanagan. TRACK 2: Paddy Acland describes the development of his own property near Eneas Lake between Peachland and Summerland. He discusses his first impressions of the Okanagan Valley, coming into it via train and boat. He describes ;the sternwheeler "Aberdeen"; labouring for a tobacco farmer in Kelowna; working for a dairy farmer, the meanest man Mr. Acland had ever met; comments on another employer, named "Fluffy" Williston. Mr. Acland offers further comments on British immigrants who came to the Okanagan during this era.

CALL NUMBER: T1085:0002 RECORDED: [location unknown], 1964-11-12 SUMMARY: TRACK 1: Paddy Acland mentions his first jobs in the Okanagan, including lumber sorting and surveying. Mr. Acland returned to England for two months, and then returned to the Okanagan. He offers an; anecdote about a man being thrown into Lake Okanagan with all of his belongings, for making a pass at a local girl, and the "rough" justice of the era. More anecdotes about promiscuity between wives; of landed settlers and hired working men. Mr. Acland discusses his marriage to a girl from Summerland, and a digression on the different types of English immigrants, including the class that settled; in Vernon during the early decades of the century, which he found snobbish and pretentious. He describes the mixture of settlers in Kelowna during this era. TRACK 2: Mr. Acland offers comments about the Edgelow family of Kelowna, particularly Mrs. Edgelow, who delighted in shocking Kelowna residents prior to World War I. He comments on the background of the Acland family and offers anecdotes ;about his mother-in-law, Mrs. Hutton of Kelowna, an ardent Catholic convert who often entertained in her large home. He tells a story about an English orchardist who planted his trees upside down, an;d describes dances and social activities in the Okanagan Valley during this era. He describes the growth and development of Summerland during its early years and reflects upon the different currents ;of immigrants and settlers which have made up the fabric of Canadian society.

CALL NUMBER: T1085:0003 RECORDED: [location unknown], 1964-11-12 SUMMARY: TRACK 1: Paddy Acland discusses some early Okanagan Valley residents. He admits that he joined the Baptist church choir to meet young and single women. He discusses relations with the Indians in the reserve near Summerland; the story of Sam McGee; comments on how the capital of early settlers was used and misused; a recollection of J.M. Robinson; comments on the Manitoba farmers induced to come; to the Okanagan Valley by Robinson; comments on how young men made a living in the Okanagan during this era; a story about the fortunes of three young working men; and comments on the Dominion Experimental Farm at Summerland. TRACK 2: Mr. Acland recalls several characters at Cobble Hill, Duncan, and offers a comparison between Vancouver Island and the Okanagan Valley during the early years of t;he century. He discusses personalities and experiences at Thetis Island; then he tells a story about two young men who shot a policeman in the Okanagan Valley, and were hunted by posses throughout the valley. More comments on English settlers; the story of the Belleview Hotel; anecdotes about the antics at the Belleview Hotel, and a physical description of the hotel.;

CALL NUMBER: T1085:0004 RECORDED: [location unknown], 1964-11-12 SUMMARY: TRACK 1: Paddy Acland retraces early working experiences and life in the Okanagan Valley. He describes Okanagan Falls around the time of the First World War; the town of Kaleden; a story about Tom E;llis; stories about rattlesnakes; a story about competing in the long jump against an Indian at Penticton; comments about Penticton and Naramata; a description of Peachland; comments about settlements; on the west side of Okanagan Lake; J.C. Dun-Waters and the building of Fintry; dairy farming; comments about the simple funerals of several wealthy Okanagan residents; and an anecdote about the funeral of Matt Wilson. TRACK 2: Mr. Acland recalls his service with a military regiment in the Okanagan Valley; organizational and disciplinary problems with the Okanagan military regiment; military stories and training with different military regiments in BC and eastern Canada.;

CALL NUMBER: T1085:0005 RECORDED: [location unknown], 1964-11-12 SUMMARY: TRACK 1: Paddy Acland discusses military training and service overseas with a Canadian battalion during the First World War. He offers further recollections of aspects of military training in British Columbia. TRACK 2: Mr. Acland tells a story of bear hunting behind his homestead with a local Indian. He describes his service as a government weed inspector along Lake Okanagan, and tells a story; about entry into the military. He comments about training in the Okanagan and he traces his military career.

CALL NUMBER: T1085:0006 RECORDED: [location unknown], 1964-11-12 SUMMARY: TRACK 1: Paddy Acland discusses further aspects of his military experience overseas during World War I. TRACK 2: Mr. Acland offers recollections about flying aircraft and training pilots during World War I; returning to the Okanagan Valley after the war; a story about losing his land after the war, and serving as a manager at the Eldorado ranch. Finally, he discusses hard times.

The manufacture of 'Elk' Portland cement

Industrial film. The manufacture of Portland cement, including scenes at the Bamberton Works of the company's BC Cement Division, a limestone quarry [probably at Cobble Hill] and some other unidentified facilities.

Industrial film. The manufacture of Portland cement, including scenes at the Bamberton Works of the company's BC Cement Division, a limestone quarry [probably at Cobble Hill] and some other unidentified facilities.