"An elderly Casca [Kaska] Indian, deserted by his people" A Casca [Kaska] woman and her children. 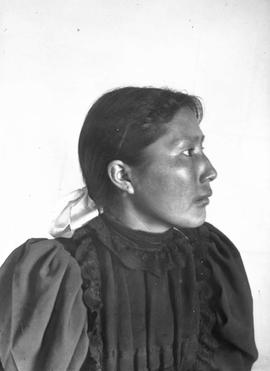 Chipewyan Semantics: Form and Meaning in the Language and Culture of an Athapaskan-Speaking People of Canada, 1974 / Robin Michael Carter

The item is a photocopy of a thesis by Robin Michael Carter titled "Chipewyan Semantics: Form and Meaning in the Language and Culture of an Athapaskan-Speaking People of Canada, 1974". i, 232 leaves; figs., tables. Bibliography, lea...

Conversation with a Chief of the Dene

The item is a microfiche copy of a thesis by Robert R. Janes titled "Dispersion and nucleation among nineteenth century Mackenzie basin Athapaskans: archaeological, ethnohistorical, and ethnographic interpretations." 1975. xiii, 224 lea... McCarthy, Mary Martha Cecelia. The Missions of the Oblates of Mary Immaculate to the Athapaskans, 1846-1870

McDonnell, Roger Francis, 1941-. Kasini society: some aspects of the social organization of an Athapaskan culture between 1900-1950

This series consists of resource management plans (RMPs) and aboriginal liaison files from the Northern Interior and surrounding region. Most records date from 1999 to 2010. These records document the creation of various kinds of land and resource...

Our native Indians : the Dene Indians

SUMMARY: "Our Native Indians" is an attempt to examine different facets of British Columbia's First Nations people, from aspects of their day-to-day lives to broader views of their cultural heritage, including their myths. This epi...

Referred to as the Wilson Duff Papers, these records are microfilm copies of primarily the original research and field notes of Wilson Duff who was curator of Anthropology at the British Columbia Provincial Museum from 1950 to 1965 and deal with ...

RECORDED: [location unknown], 1971 SUMMARY: TRACK 1: Richard "Dick" Walker offers his impressions of BC upon arriving on Halloween 1961 [?]. Then, he discusses his involvement with the Summer Institute of Linguistics, with a specializa...

Strong, B. Stephen. An economic history of the Athabascan Indians of the upper Copper River, Alaska, with special reference to the village of Mentasta Lake