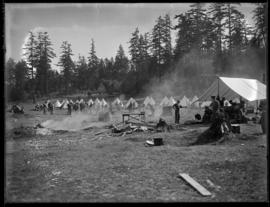 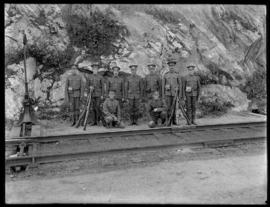 Approximately 12000 unique photographs (glass plate negatives, flexible negatives and prints). There is also a limited amount of textual records (correspondence and ephemera) dispersed throughout the collection.

Ernest William Albert Crocker was born in Yorkshire, England in 1877. In 1902, he immigrated to Canada, passing through the United States, and establishing himself in Winnipeg, Manitoba. From there, he moved to Vancouver where he started the Trio Photograph and Supply Company with two other English emigrants in 1903. They soon moved to Victoria but disbanded shortly afterwards, leaving Crocker to continue as the sole photographer at the studio.

Crocker’s early years as a photographer were marked by his postcards and other tourism photography which he sold at the Empress Hotel’s cigar shop. This enterprise caught the eyes of Victoria financiers who contracted Crocker to photograph mining prospects in the south, taking him to Mexico in 1910.

During the First World War, Crocker worked as an independent photographer under the Trio name at a military camp established at Exhibition Grounds at Willows. Several of these pictures appeared in newspapers. After the war, he continued photographing military subjects, contracting his services to several military training camps around Victoria. He also photographed important dignitaries, including members of the Royal Family while on official visits. During this time, Crocker also diversified his portfolio with landscape and portrait photography, snapshotting scenes around Vancouver Island, the Mainland Coast, the CPR route and the Cariboo Trail, some of which were published. Down the Cowichan River, Crocker also took photographs of Aboriginal communities.

During the Second World War, Crocker again focused his work on Victoria’s military activities, photographing officials and visiting military dignitaries at Work Point Barracks in Esquimalt and at the Officers Training Camp at Gordon Head. In 1946, renovations forced Crocker to vacate his suite on the top floor of the Imperial Bank Chambers where his studio had been established for 38 years. He never reopened his studio.
After the closure of the Trio studio, Crocker continued to reside in Victoria. As his health declined, he was moved to a nursing home where he passed away in 1968.

The Crocker/Trio records consist of several accessions. The earliest material was collected by the BC Archives and its predecessors as early as the end of the First World War, with the bulk of the material acquired in two periods between the 1940s and the 1960s either directly through Crocker or through his friends and estate executor apparently acting on his behalf.

Several boxes of glass plate negatives were purchased directly from Crocker in March 1946, around the same time his photography studio closed. As Crocker’s health declined, the remaining photographs were primarily in the custody or care of Crocker’s friends, notably Forest Counsel Clarence Cooper of the Forest Service, Gordon Hardy (former electrician at the Empress), W.F. Gordon, Percy Walls and Humphrey Toms who was also the executor of his estate. These men were involved to some extent in the management and organization of material before transfer to the Archives. The collection appears to contain evidence of this as there are box annotations, image descriptions, numbering, and weeding/presorting of original materials that do not appear to have been done by the creator and his potential studio partners.

In the early 1960s, “three apple boxes” full of photographs were donated to the Archives by Clarence Cooper. In 1963, Cooper noted that Crocker had more plates of “events taken throughout the whole of BC” that he was looking to transfer to the Archives. Around this time, correspondence reveals that Gordon Hardy would be delivering “several small boxes” of prints and that Mr. Cooper would donate another box of miscellaneous prints. In 1965, a box of photographic prints was picked up from Mr. Percy Walls and transferred to the Archive. Around 1970, several glass negatives were donated by W.F. Gordon. Finally in 1982, an album with 22 postcards and 3 loose prints was donated by Humphrey Toms.

The collection has been the focus of several processing initiatives from the 1980s to 2000s. This included the rehousing of the smaller sized original negatives and the production of several modern contact prints.

The fonds notably consists of military-related content from the early 1900s until the 1940s. Pre-WW1 photographs include a limited amount of photographs relating to the Canadian Militia. Photographs taken during the First World War including most departures of troops by ship from Victoria and other departures by train from Vancouver and Vernon. There are also images of numerous B.C. training camps which cover topics from training exercises, inspections, mascots and portraiture. For material covering the inter-war and Second World War, images are predominantly of ceremonies, visiting military dignitaries as well as of graduations and groups of soldiers who trained at the Officer’s Training Centre in Gordon Head. There are also photographs of the Women’s Army Corps and of various legions following the end of World War II.
The next largest group of photographs is a collection of city views, natural landscapes and other tourist-centric photography which Crocker used to make postcards which he sold. These cover large Canadian cities but also various stops along the CPR route through the Rocky Mountains, as well as other locations on Vancouver Island, across BC and down the west coast of the United States and even Mexico.
Other potential series in the Ernest Crocker fonds include portraiture, tableaux vivants, Royal Visits, celebrations and parades, and sporting events.

The collection is presently arranged by size and to some extent format. Containers are not organized by date nor by topic and appear to be mixed throughout the collection. The majority of photographic records appear to have been created in Victoria and the surrounding area, with additional photographic records covering Vancouver Island, the British Columbia Interior, Winnipeg, Toronto, London UK, California, U.S.A., and Mexico.