BC ferry terminal at Horseshoe Bay

Travelogue. "An animated curtain rises to reveal waves washing in on a sandy beach. [Long shot of] Hatley Park castle from pond at bottom the garden, a rowboat passing by. "Princess Kathleen", CPR ferry, arrives in Victoria's I...

Contracts and other material

This series contains contracts from the Department of Highways for bridges, culverts, roads, ferries, and ferry terminals. The series includes specifications and some plans.

Correspondence and other material, Chief Commissioner of Lands and Works

This series contains miscellaneous records of the Chief Commissioner of Lands and Works. The records consist of correspondence, receipts, accounts, petitions relating to pre-emptions, ferries, roads, public works, leases, and tax assessments. In... Inquiry Into Safety of Loading Procedures Within the British Columbia Ferries

Records of the Commission.By order-in-council dated 20 August 1992 the Inquiry into Safety of Loading Procedures within the British Columbia Ferries was established to inquire into and report on the safety of loading procedures for vessels within ...

Series consists of personal and political material. His personal effects include correspondence with his family in Scotland and memorabilia of Strachan's boyhood (such as badges and certificates earned as a corporal in the 211st Glasgow Comp... 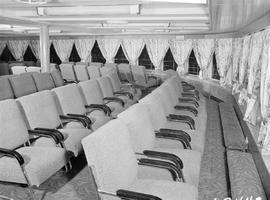 The observation deck aboard the Princess of Nanaimo

Item consists of one oil painting of the BC Ferries' fleet, painted in 1993 by Thomas McCliesh. The painting depicts the entire fleet as it was in 1993, as if the ships were anchored together in Swartz Bay.

[Queen of the North]

Item consists of a painting of the Queen of the North ferry in Dogwood colours.