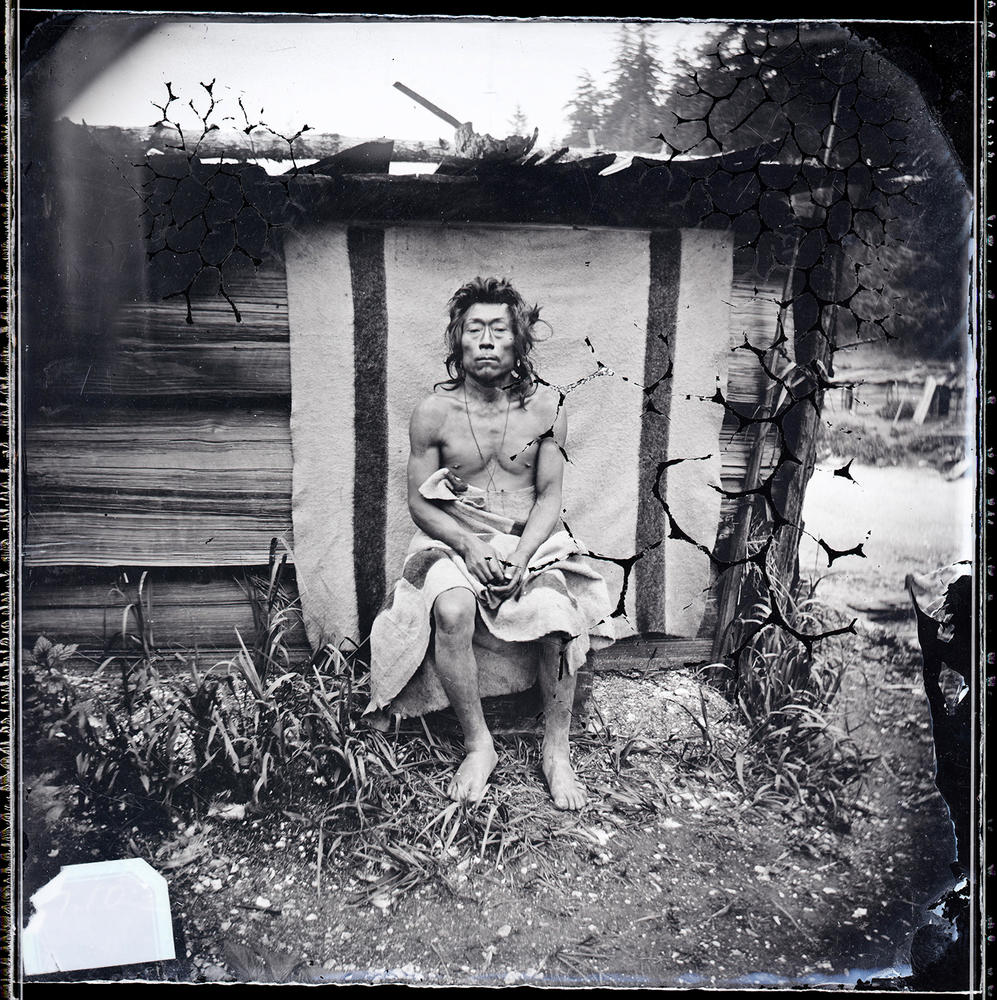 Field photograph attributed to Richard Maynard, part of a number of field portraits take at a land-based studio by Richard Maynard at one of the communities visited with I.W. Powell via the H.M.S. Boxer in 1873. It is a collodion glass plate negative (5 x 5 inches).The photograph consists of an unidentified Indigenous individual seated on a photographer’s negative box at a temporary outdoor photography studio. The temporary studio backdrop (blanket), temporary studio flooring (bare land), and temporary furniture (photographer’s wooden negative box) are in view. The sitter wears their hair short (shoulder length), does not wear clothing on the top of their torso, has bare feet and a blanket wrapped around their waist. Both hands are situated on their lap, and the sitter’s gaze is directly facing the camera. The sitter wears earrings in both ears (circular pendants) and a necklace with a long chain made of a cord (no visible pendant). The photograph depicts a wider view revealing the structure to which the temporary studio is constructed against, as well as the tree lined environment behind the building on one side. This negative does not appear to have been manipulated.

The negative is missing emulsion near the top and bottom corners on one side of the plate. There is also cracking emulsion in the area of the sitter. These conditions result in a loss of the visual information on the plate in those regions. There is also a paper label attached to the surface of the glass.

Restriction: The format of this photograph J-04204 is a glass plate negative. Researchers should consult the online reference image or reference room copy prior to consulting the original. Please contact the BC Archives for details.

Associated Materials:
Photographic prints and research documentation regarding Indigenous studio portraits, are available at the Royal British Columbia Museum’s Indigenous Collections and Repatriation department. These are housed in the Indigenous audio-visual photographic collections. For examples of photographic prints relating to this series of portraits taken at the land-based studio, see PN02094a, PN02094b, PN2095b, PN2210, PN02213 and PN02214 for cartes de visite and modern copy prints.
PN2094-A and PN2094-B are versions of this portrait, available as a carte de visite (cropped, cream coloured mount) and modern copy prints (uncropped). The carte de visite marketed by Hannah Maynard includes the photographer’s imprint on the verso with the following studio address stated as: Mrs. R. Maynard, Photographic Artist…Cor. Douglas and Johnson Streets, Victoria, B.C. The following caption is written on the verso of one modern copy print: Kwakiutl Indian Knight Inlet. See also PN 2789 for a composite photograph that employs this land-based portrait (PN2094) and an unidentified background image. Indigenous Collections also holds a group portrait featuring this sitter along with other community members photographed at what appears to be the community where the land-based studio was located. See PN10074. This same photograph is identified in the BC Archives holdings as HP075169/I-84372.

Related Materials:
The BC Archives Photograph Collection holds a group portrait featuring this sitter along with other community members photographed at the land-based studio featured in this image (see J-04191). See also HP075169/I-84372 for a different and related group portrait. The Maynard family collection (PR-1259) contains other negatives relating to this series of portraits taken at the land-based studio. See J-04202, J-04205, J-04206, J-04207 and J-04208 in MS-3378.

During the H.M.S Boxer tour of 1873, there were several accounts reported by the colonial news media and government members of the H.M.S Boxer party of a visit to a small community of Indigenous people at Takush Harbour, near Cape Caution . The British Colonist reported in the June 18, 1873 article "Return of the H.M.S. Boxer from the North with the Superintendent of Indian Affairs" that the visit to the community near Takush Harbour, near Cape Caution was on June 9, 1873. A report for the 1873 H.M.S. Boxer tour by Indian Affairs official Israel Wood Powell included a list of 19 views sent to the Secretary of the State in 1873. The list included one image described as "No 16. Group of Qwoi-Sil-lahs at Cape Caution." Powell also reports a visit with the "Qwoi-sil-lahs" at the "[Qwoi]-sil-lahs Camp" and meeting two chiefs "[Mantzie]" or "[Maulzie]" and "[Lothkin]" or [Lolthkew]" after proceeding to Cape Caution and Takush Harbour.

This photograph was originally located in BC Archives and Records Service manuscript container identified as: "Maynard Coll. Box 7.10. Indians (Indians near Cape Caution and Metlaktla [12 plates]" and "#89"

There is a [Provincial Library] label attached to the surface of the glass. The label contains the following information: "7.10."