Item J-04215 - Field photograph (stereograph) depicting a side view of a community village site on Vancouver Island with buildings, shoreline and mountain range in view attributed to Richard Maynard. 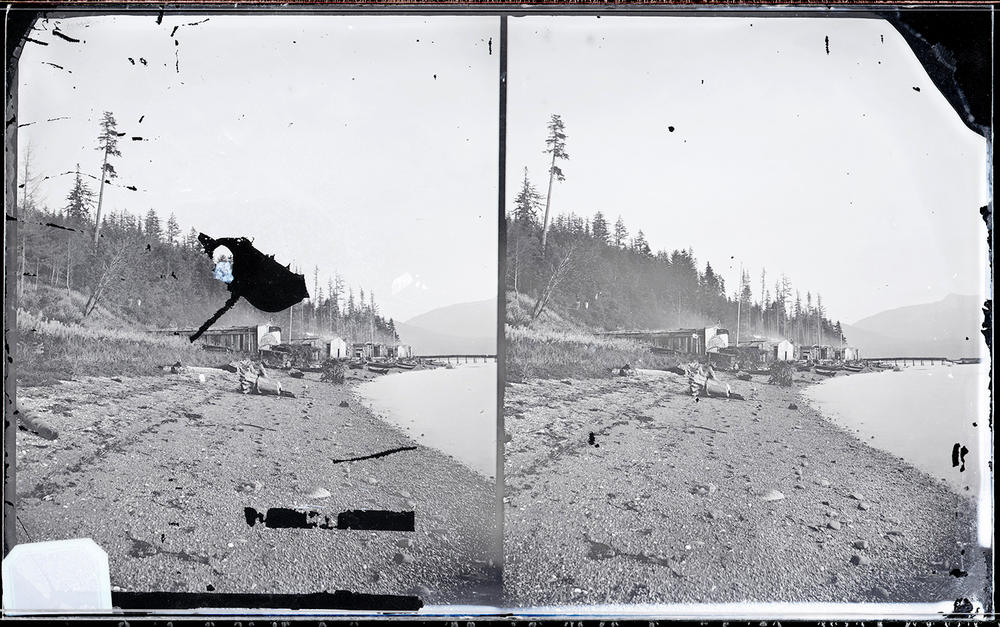 Field photograph (stereograph) depicting a side view of a community village site on Vancouver Island with buildings, shoreline and mountain range in view attributed to Richard Maynard.

The negative is missing emulsion near the middle of the image on one side of the stereo photograph and in the same region some of the emulsion is cracking. There is also a paper label attached to the surface of the glass. The following conditions results in a loss of the visual information on the plate in those regions

Restriction: The format of this photograph J-04215 is a glass plate negative. Researchers should consult the online reference image or reference room copy prior to consulting the original. Please contact the BC Archives for details.

Associated Materials:
Photographic prints and research documentation regarding field photographs taken during the 1873 and 1874 government tours on the H.M.S Boxer are available at the Royal British Columbia Museum’s Indigenous Collections and Repatriation department. These are housed in the Indigenous audio-visual photographic collections. For photographs relating J-04215, J-04200, J-04194, J-04195 and J-04217, consisting of distance and close-up views of this community village site and associated group portrait, see PN02689 (same view as J-04215 in the BC Archives holdings), see PN02709 (same view as J-04194 in the BC Archives holdings). Some of these are stereocards marketed by Richard Maynard with green card mounts (see PN02709). Some stereocards contain photographers imprints, captions, and a few annotations. One stereocard contains the imprint of R Maynard on the front and verso of the card, and a handwritten image description with the following information: "Chiefs House on Alert Bay, B.C." (see PN02709).
Another cropped stereocard contains an handwritten annotation with a reference to the publication by anthropologist Franz Boas "Social Organization of the Kwakiutl, pg 378" that contains an illustration of a similar housefront and identified as "Chief Takoglas house"(see PN02709).
Please contact the Indigenous Collections and Repatriation department to determine the access status of these records.

During the H.M.S Boxer tour of 1874, there were several accounts reported by the colonial news media and members of the H.M.S Boxer party of a visit to the Kwakwaka'wakw region of Alert Bay on Vancouver Island. The British Colonist reported in the September 19, 1874 article “The Cruise of the Boxer” that the H.M.S. Boxer party arrived and stayed at "Alert Bay (Nimpkish River)," after stopping at Fort Rupert between September 14 and 15, 1874. The article noted a visit in the evening to the "Chief's Lodge" and an observation of a ceremonial event described as a "war-dance." Photographer Richard Maynard recorded the following in his notebook regarding taking photographs at Alert Bay: “...arrived at Alert Bay at 5.30 pm went ashore and took 4 Stereo Pictures 22, 23, 24, and 25. 22 Photo of Indian Ranch at Alert Bay. 23 Chief's House at Alert Bay. 24 Indians at Alert Bay. 24 [sic] Indians & Sailors at Alert Bay. Left Alert Bay at 5am Tuesday 15th. Indian Names of [?] Klummer, [?] and Matseeta."

This photograph has the number "22" etched into the surface of the plate.