Item J-04221 - Field photograph (stereograph) of a group of fourteen unidentified Indigenous individuals (youth and adults) on board the H.M.S Boxer attributed to Richard Maynard. 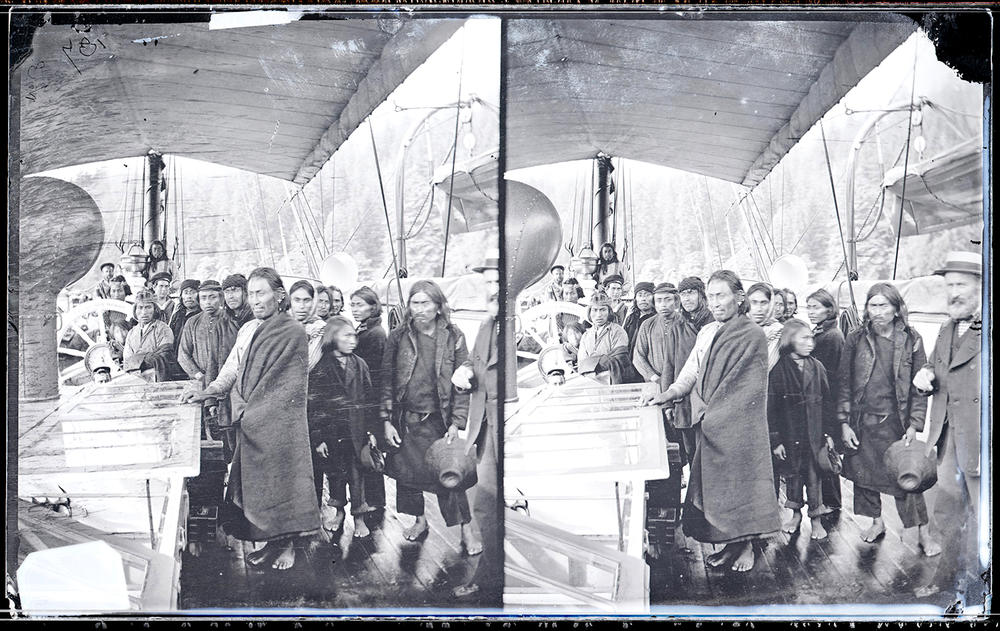 Field photograph (stereograph) of a group of fourteen unidentified Indigenous individuals (youth and adults) on board the H.M.S Boxer attributed to Richard Maynard.

Field photograph (stereograph) attributed to Richard Maynard, part of several field photographs taken by Richard Maynard during a government tour of inspection of Indigenous communities on Vancouver Island and the B.C. Mainland with I.W. Powell via the H.M.S. Boxer in September 1874. The photograph consists of a group of fourteen unidentified Indigenous individuals (youth and adults) on board the H.M.S Boxer. It is one of two images of the same group of people taken at this location. It is a collodion glass plate negative (4.5 x 7.25 inches). The ship's deck, Indigenous and non-Indigenous passengers, as well as the coastal landscape are in view. Both Indigenous and non-Indigenous individuals (likely H.M.S. Boxer crew members) are visible in the background. An individual (likely part of I.W. Powell's government party or potentially another passenger picked up enroute) stands in the foreground, visible in one of the stereo images. This figure wears American/European clothes (a suit) and a hat with dark band around the lower half of the garment. The text on the wheel of the vessel states: "Deeds Not Words."

This view reflects more members of the Indigenous visiting party. Indigenous individuals (youth and adults) in this photograph wear American/European clothes and a few members of the party now also wear blankets. One of the central figures in the party wears a blanket draped on one shoulder and waist, obscuring their thigh length tunic and several strands of a beaded necklace visible in the other photograph taken of this group. This individual (adult) faces the camera in side view. Their metal septum ring is still visible in their nose and the photograph reflects a display of the multiple earrings worn along the edges of their ear. Some members of the Indigenous party wear their hair short (above the ears or shoulder length), and some wear their hair long. Several of the adult sitters wear metal facial adornments in their ears and noises, including septum rings. One of the central figures (adult) from the previous image does not appear to be present (individual wearing a three piece suit). More individuals wear headbands made of fabric. The individual holding a woven hat is closer in the front of the party. Designs for adornments nor head wear are not visible in this photograph.

This photograph does not appear to have been manipulated.

There is a paper label attached to the surface of the glass.

Restriction: The format of this photograph J-04221 is a glass plate negative. Researchers should consult the online reference image or reference room copy prior to consulting the original. Please contact the BC Archives for details.

Associated Materials:
Photographic prints and research documentation regarding field photographs taken during the 1873 and 1874 government tours on the H.M.S Boxer are available at the Royal British Columbia Museum’s Indigenous Collections and Repatriation department. These are housed in the Indigenous audio-visual photographic collections. For examples of this photograph, see PN4708 for a card mounted print and modern copy prints. The print on a black/brown card mount, marketed by Albert H. Maynard, includes the following name and address listed on the photographer's imprint on the verso of the card: “Albert H. Maynard, Naturalist and Taxidermist. Address: R. Maynard, Photographer, Cor. Douglas and Johnson Streets, Victoria, BC." Please contact the Indigenous Collections and Repatriation department to determine the access status of these records.

Related Materials:
For another photograph of the same group of people taken at this location, see J-04220, available in this series (MS-3378). This photograph depicts the visiting Indigenous party wearing American/European clothes and without blankets.

During the H.M.S Boxer tour of 1874, there were several accounts reported by the colonial news media of on board visitors to the H.M.S. Boxer. The British Colonist reported in the September 19, 1874 article “The Cruise of the Boxer” of several instances on the tour 1874. This included during a stop on September 7 at Green Cove to visit several Nuu-chah-nulth nations of the southern region, reported in the media as the “Ohiet” (Huu-ay-aht) and “Owchucklisaht”. Another instance was reported in the news occurring at a stop on September 8th at “Hecate passage north of Vargas Island” in Clayoquot Sound to visit several Nuu-chah-nulth nations of the central region, reported as the “Ahousahts” (Ahousaht) and the “Klahookwahts” (Tla—o-qui-aht). Several members of the Nuu-chah-nulth nations of the northern region, reported in the media as the “Ehahtisaht” (Ehattesaht) and the “Noochatlaht” (Nuchatlaht) were reported to have visited onboard on September 11 at “Queen's Cove”. Finally on September 13 at “Shushartie Bay” the “Nawitee” people were reported to have come on board. Photographer Richard Maynard recorded in his notebook of taking two stereos of “Indians on Board” on September 7 at Green Cove.

This photograph has the numbers "137" and "No.3" etched into the surface of the plate.