Item J-04536 - Field photograph of a group of Indigenous individuals (youth, adults) and sailors (adults) with a display of caught fish on the beachfront on Vancouver Island attributed to Richard Maynard. 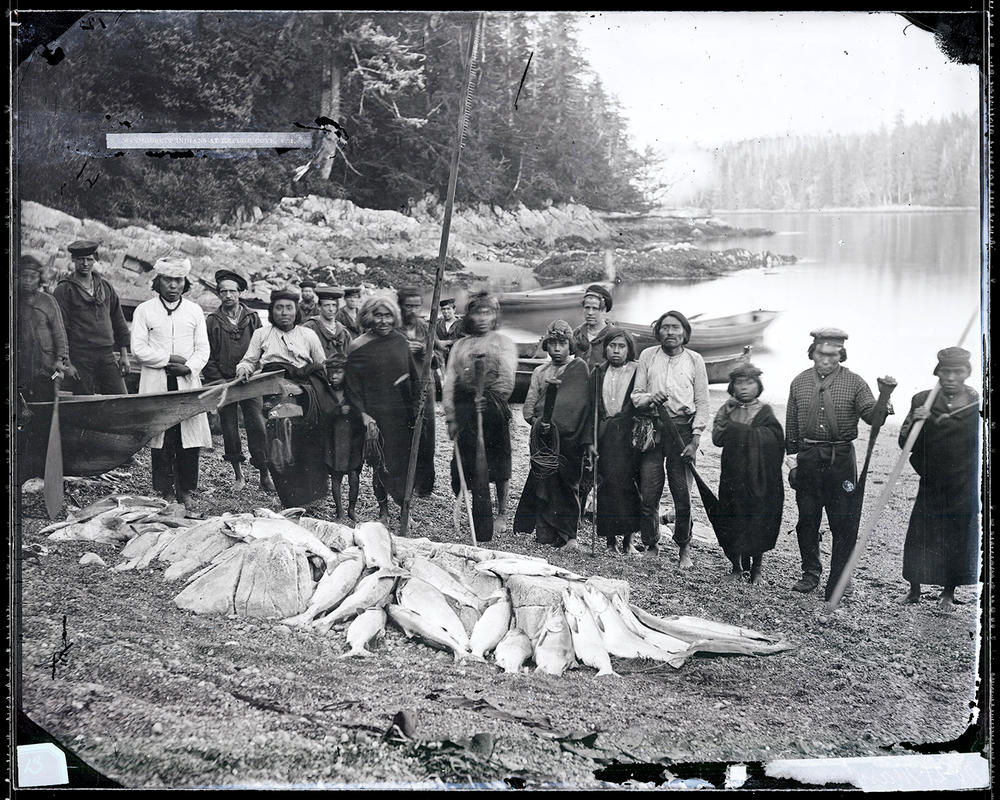 Field photograph of a group of Indigenous individuals (youth, adults) and sailors (adults) with a display of caught fish on the beachfront on Vancouver Island attributed to Richard Maynard.

The negative is missing emulsion on one side of the stereo photograph. There is also a paper label attached to the surface of the glass. These conditions result in a loss of some of the visual information on the plate in those regions.

Restriction: The format of this photograph J-04536 is a glass plate negative. Researchers should consult the online reference image or reference room copy prior to consulting the original. Please contact the BC Archives for details.

Related Materials:
In this series (MS-3378), for photographs relating to a similar group portrait posed with a display of caught fish, likely photographed at the same location depicted in this image, see J-04222. Part of the Maynard family collection (PR-1259).

Other private records hold related textual records. For textual materials such as photographer Richard Maynard’s personal account of the 1874 tour of inspection with I.W. Powell, see the entry “1874 Round Van. Island on HMS Boxer" in one of the Maynard notebooks sometimes referred to as “book 1” available in MS-1077 Newcombe Family papers (reel A01764, box/volume 47, file 2a). In some instances, outdated terms are present in this volume used by Richard Maynard to identify Indigenous people and communities. For an example, historical terminology found in photographic captions reflect terms used in Chinook jargon (e.g. the use of the English term "Squaw" which has translated to “Kloochman” in Chinook, of which the Chinook term “Kloochman” has translated to “Woman; female” in English).

There is a [Provincial Library] label attached to the surface of the glass. The label contains the following information: "13"

There is a piece of tape attached to the surface of the glass with handwritten caption information. The label contains the following information: "No. 21 Man.."

During the H.M.S Boxer tour of 1874, there were several accounts reported by the colonial news media and members of the H.M.S Boxer party of a visit to Indigenous communities living near Refuge Cove on Vancouver Island. The British Colonist reported in the September 19, 1874 article “The Cruise of the Boxer” that the H.M.S. Boxer party passed through Clayoquot Sound and anchored at Hecate Passage North of Vargas Island on September 9, 1874. Later, the “Indian Commissioner” of the H.M.S Boxer was reported to have interviewed 100 Indigenous people who were said to have arrived in 25 canoes on September 9, before moving onto and anchored at Refuge Cove the same day. The paper reported that Refuge Cove was “where the Mahnohhahsahts live” in a number of “17” and that it was salmon run season. Photographer Richard Maynard recorded the following in his notebook regarding taking a photograph near Clayoquot Sound: “Tuesday Morning left Green Cove for Clayoquot Sound. Took a Stereo of Sailors on Rocks [?] Left their and went to refuge Cove Indian name [Manhousesett]. 7 & 8 Views of the Bay. No. 9. Squaws at Same Place. No 10, 11 & 12 Indians of Same Place Large. Left Refuge Cove.”

The plate contains a typed caption with the following information: "Manhousett Indians at Refuge Cove, V.I."

This photograph has the numbers "12" etched into the surface of the plate.