Item J-04225 - Field photograph (stereograph) of a view of several buildings at a community village site on Vancouver Island attributed to Richard Maynard. 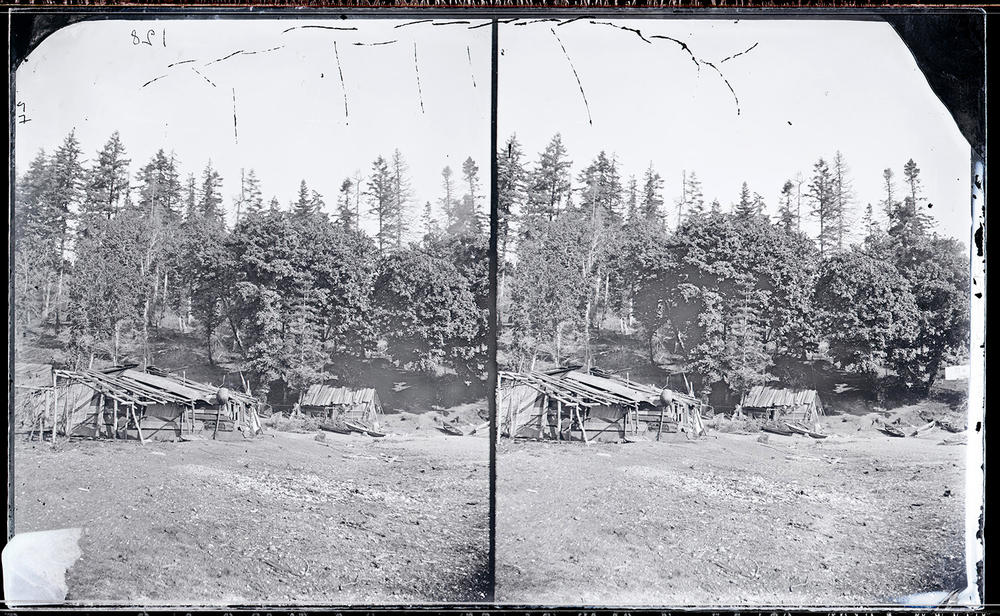 Field photograph (stereograph) of a view of several buildings at a community village site on Vancouver Island attributed to Richard Maynard.

The some of the emulsion is cracking on top edge of the stereo photograph. There is also a paper label attached to the surface of the glass. These conditions result in a loss of some of the visual information on the plate in those regions.

Restriction: The format of this photograph J-04225 is a glass plate negative. Researchers should consult the online reference image or reference room copy prior to consulting the original. Please contact the BC Archives for details.

Associated Materials:
Photographic prints and research documentation regarding Indigenous field photographs, are available at the Royal British Columbia Museum’s Indigenous Collections and Repatriation department. These are housed in the Indigenous audio-visual photographic collections.

For several stereocard print photographs (on green and yellow card mounts) of this photograph marketed by Richard Maynard, see PN5970. The caption handwritten on one of the back of the (green) card mounted stereocards consists of: "Indian Village Departure Bay, B.C." The card has the following photographer imprint on the verso: "R Maynard, Photographic Artiste. And Dealer In All Kinds of Photographic Materials, Cor Douglas and Johnson Sts. Victoria, B.C. Views of British Columbia and Vancouver Island For Sale." On another two (yellow) card mounted stereocards, the following typed caption is found on the front of each image: "Indian Ranch at Departure Bay."

During the H.M.S Boxer tour of 1874, there were several accounts reported by the colonial news media and members of the H.M.S Boxer party of a visit to a Coast Salish community near Departure Bay on the Vancouver Island. The British Colonist reported in the September 19, 1874 article “The Cruise of the Boxer” that the H.M.S. Boxer party arrived and stayed the evening in Departure Bay between September 16-17, 1874. Photographer Richard Maynard recorded the following in his notebook regarding taking several photographs at Departure Bay: “Started from Gowland Harbour Wednesday 16 for Departure Bay. Arrived at Departure 5pm. Thursday 17 Took a Photograph of [Capt Edgertons] House [and] of the [??] Houses also One of Indian Village while the [sic] where getting Coal. Left at ½ past 10 again with a fair wind”

This photograph has the numbers "128" and "24" etched into the surface of the plate.