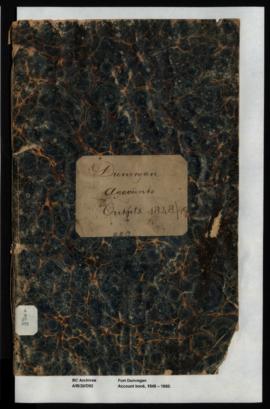 Dunvegan became a Hudson's Bay Company post after the union of the HBC and the NWC in 1821. The post was first established as a North West Company post by Archibald Norman McLeod in 1805. McLeod had named the post after the seat of the McLeods on the Isle of Skye. It was located on the north bank of the Peace River, 65 miles upstream from the confluence of the Peace and Smoky Rivers in present-day Alberta.
From 1878 to 1886, Dunvegan was headquarters of the Peace River District, after which district headquarters were moved to Lesser Slave Lake. In 1918, Dunvegan was closed.

The custodial history is unknown.

The fonds consists of account books of Fort Dunvegan.

Associated records held by the Hudson's Bay Company Archives at the Archives of Manitoba.