RECORDED: [location unknown], [196-] SUMMARY: TRACK 1: Mr. Alex Wylie discusses hiking near Hinton in 1905 with some traders as he moved to BC; moved to Alberta from Scotland; describes the fort at Edmonton; he describes how he became a packer in ...

Series contains two booklets relating to a Government Auction Sale of property at Prince George, Fort George, and South Fort George to be held at Vancouver, Dominion Hall, May 19, 20, and 21, 1914, Victoria, Connaught Hall, May 26 and 27, 1914, an...

This series contains records of the Water Recorders and Government Agents of Barkerville and Fort George relating to water licences. Includes correspondence, licence certificates and plans of licences issued to the Canadian Northern Pacific Railw...

SUPPLIED TITLE OF TAPE(S): Harry and Louisa LeDuke and their life in the Burns Lake area PERIOD COVERED: 1903-1939 RECORDED: Burns Lake (B.C.), 1971 SUMMARY: [No content summary available for this interview.]

Correspondence (inward and outward) with both Supreme and County Courts at Fort George. This numbered series includes many inquiries regarding naturalization, time and location of court sittings, 1916 and 1917 lists of all civil and criminal acti...

RECORDED: [location unknown], [196-] SUMMARY: TRACK 1: Mr. Del Miller recalls his arrival in BC in 1909 from Ontario; a wide variety of jobs he worked at upon arrival; South Fort George in 1911; Hudson's Hope; trapping; shipping freight on P...

The fonds consists of correspondence, a diary, a report, a meteorological observation journal and a photograph album created by E.A. Weir and E.W. White between 1911 and 1913. The records in the fonds documents the agricultural survey of the Nor... 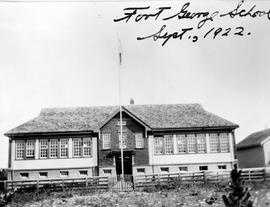 Horse-drawn cart in partly flooded street in front of Royal Bank of Canada building on right; building with Laundry sign on left.

RECORDED: [location unknown], 1964-07-16 SUMMARY: TRACK 1: Mr. Ivor Guest recalls his history; he was born in Yarmouth, Nova Scotia, in 1886. He first came west in 1908 to Edmonton. He eventually came to Vancouver and saw posters of Fort George...

RECORDED: [location unknown], [196-] SUMMARY: TRACK 1: Mr. Louis Lobsinger came from Bruce County, Ontario, where his family had two farms. He describes the story of how he came to BC to visit his sister in the Nicola Valley, and was hired as a p...

The sub-series consists of oral history interviews about the history of the Babine, Nechako, Omineca, Stuart-Takla and Upper Fraser regions, from the 1980s to the mid-20th century. The interviews focus mainly on the areas of Babine Lake, Burns L...

People in landscape : The beginnings of Prince George

SUMMARY: This program features recollections of Fort George and the land boom before the First World War. The voices heard are: Charles Whidden, Harold Moffat, and J.B. Guest. RECORDED: [location unknown], 1961-07-07 SUMMARY: TRACK 1: Mr. Richard Carroll, known as Dick, describes arriving into the [Nechako?] area from Vancouver in 1908 on his way to Alaska; he stopped to work on the Grand Trunk Railway at the head of n...