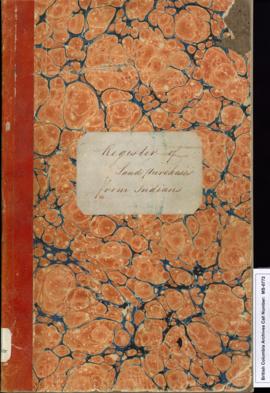 Fort Victoria was established as a Hudson’s Bay Company trading post by James Douglas on March 14, 1843 and became the headquarters for western operations of the Hudson's Bay Company in 1849. The original structure was a 100-yard-square enclosure that lay within the boundaries of present-day Government, Wharf, Broughton, and Bastion streets in the area known by the local First Nations as “Camosack.” The fort is notable for being the first European settlement on Vancouver Island and was known briefly as Fort Albert and Fort Camosun before being renamed in honour of the young Queen Victoria. Victoria Harbour was favoured over Esquimalt Harbour as the location for the fort due to the gently sloping land that surrounded the area and was suitable for agricultural purposes.

The last of the remaining fort buildings were demolished in November 1864.

The fonds consists of correspondence, account books, letterbooks, and fur tariffs of Fort Victoria and the Victoria Land Office of the Hudson's Bay Company. Fonds include a register of land purchased from Indians near Fort Victoria and a record of agreements with Indians at Fort Rupert, Nanaimo, Barkley Sound and Port Alberni.

Some series and item level descriptions are available.