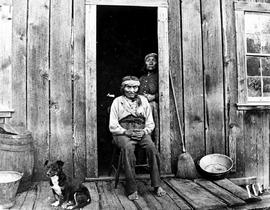 "Old Doctor Bob", one of the Hudson's Bay runners, 106 years old; of the Yakweakwioose reserve, Sardis

Woman behind him in doorway; dog sitting next to him on porch. 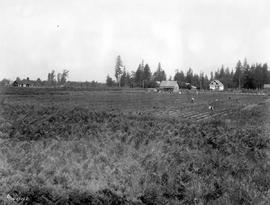 Documentary. "The gift of the Fraser River is the rich soil it has left in the Fraser Valley. The result is the richest growing land in B.C. This film investigates the agricultural and industrial activities of the Chilliwack area, showing t...

The item is a reel of film out-takes from ca. 1957. It shows various bridges; bridge opening in Upper Fraser Valley (possibly Agassiz-Rosedale), with Highways Minister Gaglardi and Premier Bennett addressing the crowd; grading a roadbed.

The item is a composite print of an educational film made in 1958. It shows how hydroelectric power is harnessed and distributed to homes and industry. Shows dam and powerhouse sites, the maintenance of power lines, and the various users of elect...

The item is a black and white workprint of an industrial film made between 1955 and 1958. It shows the construction of the 345,000-volt power line from Bridge River to Rosedale, which took three summers to complete.

Documentary. "Harvesting grain by tractor. Stooks. Threshing by "gas power" -- thresher driven by a belt from the tractor. Sacking grain. Trucks taking it away. Sacks being loaded into CP boxcars. Train pulls out and passes acres of...

This series contains the correspondence inward to the Chief Commissioner of Lands and Works, Colonel R.C. Moody. The records consists largely of letters from Governor James Douglas and the Colonial Secretary pertaining to town lots, other lands, ...

This series contains cause books from Chilliwack Small Debts Court covering the periods 1914-1925 and 1929-1951. The series also consists of one index volume to records from 1914 to 1937. The index is arranged alphabetically by both plaintiff and...

The series consists of Chilliwack divorce case files from 1939 to 1949.