Travelogue. The story of 'Ksan, a restored Gitskan Indian village near Hazelton, officially opened in 1970 as a centre for native culture, arts and crafts.

Communities West : legends of the Gitksan

SUMMARY: "Communities West" is a series that looks at specific communities in western Canada. This program is about the Gitksan of Northern B.C., the significance of their totem poles, and the images depicted ;on them..;

The series consists of transcripts of court proceedings, cross-examinations, examination of discovery, exhibit indices, closing statements, briefs, and reasons for judgement of Delgamuukw v. The Queen. The case was heard in the Smithers Supreme Co... 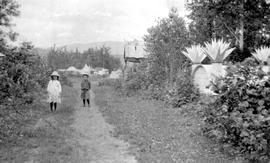 SUMMARY:"Minskinisht", #10 in the series, is the story of the founding and early days of the Indian mission at Minskinisht on the Skeena -- now known as Cedarvale. The story is continued from program #9; see T3256:0001 (description AAAB3...

Living memory : The Indians of Minskinisht

SUMMARY: "The Indians of Minskinisht", #12 in the series, consists of recollections about the Indian people who lived at Robert Tomlinson's mission at Minskinisht, now known as Cedearvale.

SUMMARY: "The Holy City", #11 in the series, is about life at the Indian mission of Minskinisht on the Skeena, founded by Robert Tomlinson.