The fonds conists of 1 colour and 46 black and white photographs taken or acquired by Cecil Wynne Davies between ca. 1940 and 1963. 45 of the photographs depict courthouses around the province, which included offices for government agents, and tw... 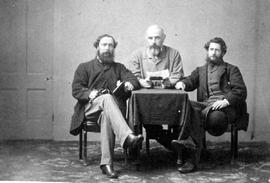 The series consists of water grant registers and water licence registers. The records were created between 1897 and 1966 to record applications to use water. All records relate to the West Kootenay water region.The series contains two subseries....

The series consists of a bound volume of accounts and paylists from Prince George Agency, 1927-1938.

Records of the Government Agent, Clinton

The series consists of assorted forms and records that may have been used by the Government Agent in Clinton in the 1920s. The series includes a formulaic Grand Jury statement signed by C A Semlin, as well as forms and instructions for opening co...