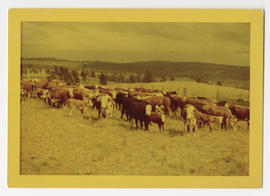 3 m of textual records and other material

The Guichon family has been an important presence in the Nicola Valley of British Columbia (BC) for over 150 years. The founding members of the BC Guichon family arrived in BC in 1859. Three Guichon brothers - Charles, Laurent, and Pierre – came to the region of the future province of British Columbia for the gold rush but after only a few years they bought land and began to ranch. The Guichon family successfully acquired, consolidated, and raised a precedent setting stock and developed a considerable amount of ranch land in the BC interior. Since the local industry’s formative years, the family has played a significant role in the development of the BC ranching industry including input into government policy. The family remains community leaders involved in agriculture, business, education, and politics.

The Canadian patriarch of the Guichon family is Joseph Guichon. Joseph was born in Chaméry, France, October 22, 1843, the youngest of five siblings. Three of Joseph’s older brothers left France to pursue their fortunes in the goldfields of North America. In 1862 he left France to join his brothers. Joseph arrived on the west coast March 22, 1864. Despite finding some small gold deposits, one year in the Barkerville gold fields convinced Joseph searching for gold was too precarious. He spent the winter of 1864 in Victoria and then he took a farm hand’s position in the fall of 1865 at Charlie Semlin’s ranch near Cache Creek. His first six months he worked for board and room. In the spring of 1866 he took a position with Jean Caux, (aka. “Cataline”), one of the largest pack trains servicing the gold fields. Joseph worked on the pack trains operating from Yale to the Omineca River using the Hudson’s Bay Company brigade trails. There was a minor rush when gold was found in this area. By 1867 the “Cataline” company split the train service and Joseph was put in charge of 125 mules and a set of horses. While wintering horses in 1866-67 Joseph Guichon recognized the ranching potential of the area. After two years working as a packer for the “Cataline” company he had collected a small herd on a homestead near Savona's Ferry (Savona) with another packer, Jesus Garcia. In 1868 he took up land to the south near Durand Creek. Joseph filed a pre-emption on Durand Creek and stayed there for several years establishing a ranch.

In 1875 Joseph joined with brothers Laurent and Pierre to buy 160 acres of land on Mamit Creek (now known as Guichon Creek), an outlet of Mamit Lake [BC Archives, GR-0112, Box 60, File 1006-1010]. The pre-emption documentation is in Laurent’s name. It was here Joseph met his future wife Josephine Rey from Rumilly, Haute-Savoie, France. In 1877, Federal Government geologist George Mercer Dawson passed through the area. He reported to Ottawa the Guichons were successfully growing a variety of crops despite the location. Pierre Guichon died in New Westminster at this time. In 1878 Laurent and Joseph relocated southeast and developed a ranch near Chapperon Lake, known as the Home Ranch. Also in this year, Joseph married Josephine Rey. They were wed in Keating, near Victoria, B.C. Josephine retuned to the Home ranch from Keating the following year with their newborn son Lawrence Peter. Joseph’s brother Laurent married another Rey sister and the combined land holdings of the two families formed an impressive presence in the Nicola Valley with grazing lands connecting from Mamit Lake to Chapperon Lake. Joseph worked for wages, not as a shareholder, for approximately three years at Chapperon Lake. In 1882 Joseph and his family moved east of Nicola Lake (lot 105, Township 97, surveyed 1881) and the Douglas Lake Cattle Company purchased the Guichons’ Chapperon Ranch. In the deal Joseph retained the ranch’s 1,400 head of cattle and Laurent took the funds to the coast and set up businesses in Ladner and New Westminster. This began the Guichon family presence in New Westminster and Ladner where several landmarks continue to carry the Guichon name. When Laurent came to the coast in approximately 1881, Bill Ladner, a close friend, convinced him to purchase 1,000 acres of farmland adjacent Ladner’s property on the Fraser River Delta. The Guichon land measured from what is now 46A Street to 41B Street in what was originally known as “Ladner’s Landing,” today the town of Ladner, BC. Laurent Guichon and his family subsequently moved to New Westminster. After selling Chapperon Ranch, Joseph and Josephine purchased all of the substantial Home Ranch and the Guichon Cattle Company was born. Joseph Guichon bought lot 110, site of the well-known Quilchena Hotel and opened it in in 1908. In 1904 Joseph purchased the O’Rourke Ranch on Quilchena Creek and in 1911 he bought the Triangle Ranch.

During the early years of the Guichon’s ranching in Nicola Valley, the family diversified their herd. In the early 1880s Joseph brought in Percheron draft horses and thoroughbreds which he raised for sale to the North-West Mounted Police. In 1896 Joseph purchased three head of purebred Hereford cattle from the herd of Senator Cochrane of the Province of Québec. The family has been continually involved in beef cattle ranching since then. After relentlessly expanding his holdings, in 1918 Joseph distributed the Guichon farm to seven members of the family. By the time of Joseph Guichon’s death on April 30, 1921, the family had accumulated almost 40,000 acres of land and held leases for over half a million acres of crown land. By 1933 the Guichon ranch owned 4000 head of cattle and 500 horses. In 1934 the ranch registered as a company under the name The Guichon Ranch Limited. In 1946 shares were exchanged, new shareholders bought in, and some older shareholders sold out, the result was a new company, The Guichon Cattle Company Limited.

Lawrence Peter Guichon was the first family member to be born in Canada. He was born in Keating, near Victoria on September 7, 1879. He was educated at St. Louis College in New Westminster and returned to the Guichon ranch in 1897 at the age of 18. From his return in 1897 until 1957 L.P. Guichon was the principal organizing force driving the ranch. One of the first challenges L.P. Guichon confronted was the destruction by fire of the family home. L.P. Guichon acquired a small saw mill in the Okanagan and rebuilt the home.

Lawrence P. Guichon was a central figure in several early agricultural organizations in the province. In 1912 the BC Government began to support granting Crown land to farmers in the interior of the province. As a response to this initiative, in 1913, 33 ranchers and farmers including L.P. Guichon, founded the Nicola Stock-Breeders and Agricultural organization (NSBAA). The group successfully lobbied for a privileged use of Crown land for ranching purposes. In 1914 the BC Stock Breeders Association formed with L.P. Guichon as a founding Director. In 1929 this group became known as the B.C. Beef Cattle Growers’ Association. In 1918 L.P. Guichon became manager of the Guichon Ranch. The same year, the BC Livestock and Sales Association was established with the stated purpose “to sponsor an annual sale and show at Kamloops.” L.P. Guichon was an original organizer of the first annual Kamloops Bull Sale. In 1929 the B.C. Beef Cattle Growers’ Association took responsibility for the Kamloops Annual Bull Sale. L.P. Guichon served on the directorate that established the BC Beef Cattle Growers Association (BCBCGA). As Director of the BCBCGA, L.P. Guichon worked with the Provincial Government to formulate several pieces of legislation directly affecting cattle ranching in B.C. L.P. Guichon has been credited with the creation and revision of the Beef Grading Act, the Brand Act, and the Horn Fund Act. The BCBCGA was eventually renamed the BC Cattleman’s Association. L.P. Guichon served as a Brand Commissioner [ca 1944-1950], Justice of the Peace, and Grazing Commissioner.

After the grasshopper outbreak of 1922-23, a movement in the interior began to maintain constant control of the “‘hopper.” In 1929 a meeting of the Nicola Valley Stock Breeders Association, the first Grasshopper Control Committee was formed to organize a response to the devastation of grasshoppers. With influence from this Committee, in 1930 the Grasshopper Control Act was passed. It allowed for a majority of landholders in any area to petition to become designated a grasshopper control area, allowing for designated provincial monies and other assistance. The Nicola valley, under the leadership of L.P. Guichon, became the first designated area in 1930 (Nicola Historical Quarterly, Vol. 23 no. 2, pp. 10-17). L.P. Guichon was the chairman of the Nicola Grasshopper Control Committee. He corresponded with scientists across North America and liaised with the provincial government and the University of British Columbia to address the problem. He collaborated closely on this issue with the Nicola Stockbreeders Association, the federal Department of Indian Affairs, and the provincial Department of Agriculture. L.P. Guichon became convinced a natural, conservationist, holistic approach to the problem, not an attempt to exterminate all potential vermin to the ranching and agricultural industries, was the most enduring solution. For his dedication to both the environment and the ranching industry, L.P. Guichon was awarded an Honorary Doctorate in science from the University of British Columbia in 1953. After receiving his Doctorate, L.P. Guichon continued his public service with work with the Indian Affairs office of the provincial government. L.P. Guichon passed away in Esquimalt, B.C. on April 10th, 1963. He was buried in Merritt, BC.

In 2001 the Guichon Family Award was established at UBC. The award is made in honour of L.P. Guichon who with limited formal education, contributed greatly to cattle ranching and the BC agricultural industry.

The records which combine to represent the Guichon Family fonds have remained in possession of family members for generations. Several members of the Guichon family have served as family historians and have collected and saved records. Carolyn Guichon is the most recent active family historian. She has kept Guichon family records at her home in Calgary for many years. The family has also employed an historian, Brodie Douglas, who has reviewed and cited Guichon records in his local histories and articles on the family.

The fonds consists of records created by the Guichon family between 1882 and 2013 and contain files relating to the family history including correspondence, diaries, subject files, genealogies, news clippings and scrapbooks; files relating to the family ranch including correspondence, reference material and publications; over 1300 photographs which document family and ranch life; and an audio recording interview with Lawrence Guichon.

The records were loaned for copying or donated by the Guichon family in various accessions in 1984 and 2014.

Some of the records are in French.