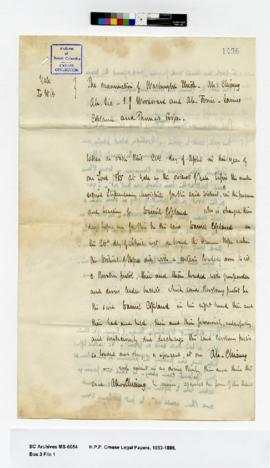 Henry Crease was born in Cornwall, England. He was called to the bar in 1849. In 1853, he married Sarah Lindley. He came to Victoria in 1858, where he became the first barrister qualified to practice in both B.C. and Vancouver Island. From 1861 to 1870, Crease was Attorney-General and member of the Legislative Council. He was appointed a judge in 1870 and retired from the bench in 1896. He was also knighted in that same year.

The fonds consists of the legal papers of Henry Crease, including indentures, judgments and numerous other documents.