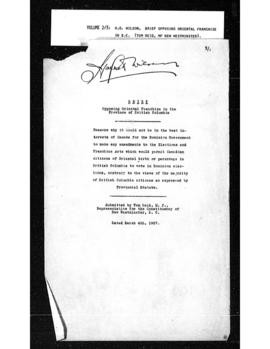 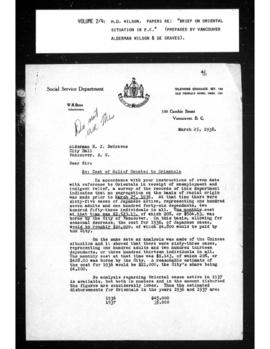 Halford Wilson was born December 7, 1904 in Vancouver, the son of Rev. George H. Wilson (Anglican). He completed his formal education at King Edward High School and entered Vancouver's business community as a bank clerk and later became an insurance agent. In 1934, aged 29, Wilson was elected to Vancouver City Council on a campaign that stressed the theme of the revitalization of Council with fresh, young blood. During his first term in office, Wilson, Chairman of the City Council's Airport Committee, established a training program for fighter pilots in Vancouver.

During the pre-war and early war years, Wilson fearful of a Japanese invasion of the Pacific Coast, was an advocate of stringent controls of the Japanese in British Columbia. In 1940, Wilson joined the Canadian Army; however he continued on City Council until 1942 when he was sent to Britain. In 1944, shortly after D-Day, Wilson landed in France. He was awarded the Croix de Guerre for service with the French forces during the liberation of France in 1944.

Returning to Vancouver, Wilson, defeated in his bid for the Office of Mayor by Gerry McGeer in 1946, was re-elected to Council in 1947; he served until 1953. Wilson was re-elected in 1955 as an independent; two years later, he regained his NPA endorsement and remained on Council until 1963 when he campaigned for Mayor against Bill Rathie. Wilson returned to City Council where he served until 1972. In December of that year, campaigning on the value of his long experience, Alderman Halford D. Wilson was defeated in his bid for re-election to the City Council of Vancouver.

The fonds consists of correspondence and papers regarding Halford Wilson's anti-Oriental stand of 1938-1942, pamphlets regarding Orientals in British Columbia, Sunday school picnic accounts and church camp accounts during the 1930s.

Presented to the PABC by Halford D. Wilson