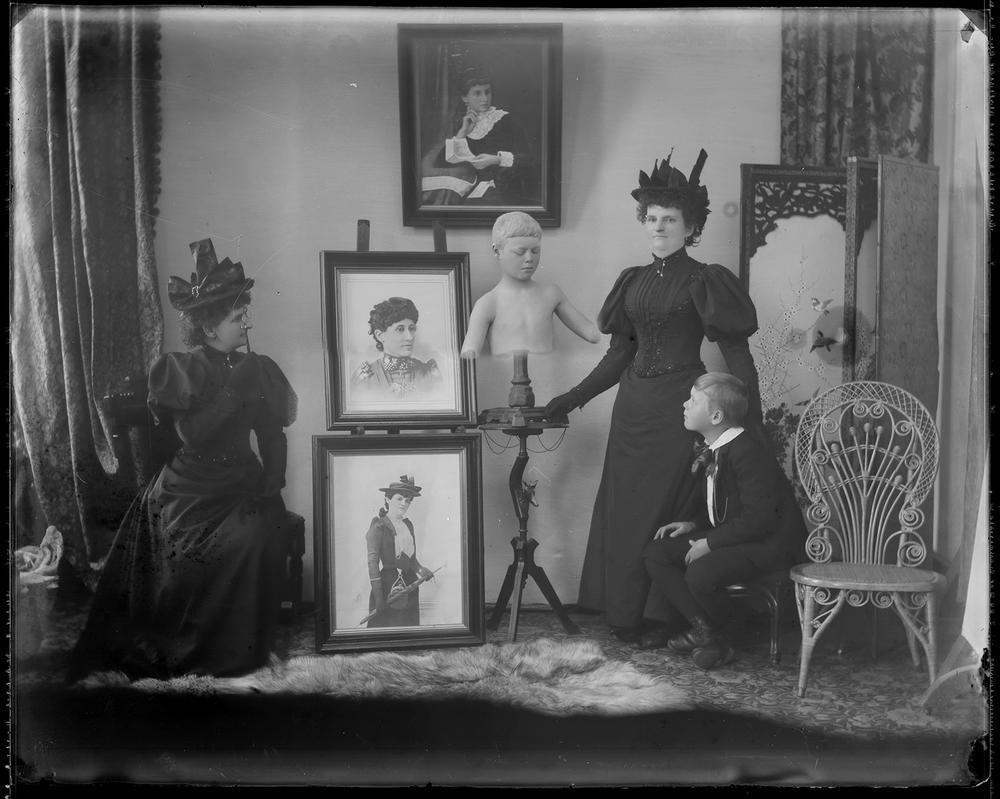 Hannah Maynard and her grandson, Maynard McDonald, in a tableau vivant composite photo

Item consists of one tableau vivant work by Hannah Maynard, part of a series of tableau vivant works created in the 1890s. It is a gelatin dry glass plate negative. The composite work is composed of several photographs merged together to form a single work using the techniques of double or multiple exposures. The image features Hannah Maynard with grandson Maynard Macdonald, along with other portraits of Maynard family members in a domestic Victorian parlor scene. Grandson Maynard Macdonald (the bust of) also appears as a photo sculpture on a table and is the central focal point. The portraits of Hannah and husband Richard Maynard's deceased daughters (and daughter-in-law) are visible as studio portraits on the easel and floor in front of the photo sculpture and in the painting above. Jane is on the wall behind the 'statue.' The negative appears to have been manipulated. There are touch ups in [pencil] on the negative plate in the regions depicting the faces of Hannah Maynard, adding to the enhancement of the final image and reduction of wrinkles. Some studio flooring (rose pattern) attributed to Mrs. R. Maynards Photographic Gallery, as well as curtains, natural lighting, furniture, screen and back wall are visible. The visual information at the bottom edge of the photograph appears to be blocked or cut off.

There is [pencil] on the surface of the negative.

Preservation restriction: item is a glass plate negative. Researchers should consult the online reference image or reference room copy prior to consulting the original.

Approximate date provided by Ivan Sayers’ research on fashion and articles of clothing.

This photograph was originally located in BC Archives container identified with: “Removed from 10a Pioneers Groups #9 Shelf 84"