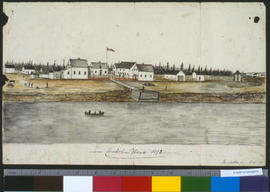 Martha Harris (née Douglas) was born in Victoria, British Columbia in 1854 and was the youngest member of her family. Her father was James Douglas, the Governor of the Colony of Vancouver Island and her mother was Amelia Douglas.

When Martha was 18, she was sent to England for her education. Martha returned to Victoria in 1874, and in 1878 she married Dennis Harris shortly after her father’s death. Dennis Harris was a land surveyor with the Canadian Pacific Railway and later became an engineer and businessman in Victoria.

Both of Martha’s parents were mixed race – her father had been born in British Guyana to a mixed race mother and a Scottish father, and her mother was part Cree. Although her parents faced prejudice, her mother still taught Martha Cree legends and stories, as well as other First Nations stories from the west coast. After both of her parents had passed away, Martha Harris wrote and published adapted versions of the stories her mother had passed down.

Martha Harris was a member of societies such as the Island Arts and Crafts Society, the Lace Club of Victoria, and the Women’s Institute Weavers Guild. She and her husband had seven children together, and Dennis passed away in 1932 and Martha passed away in 1933.

The fonds consists of correspondence of the Harris family, principally that of Martha and Dennis Harris, memoirs, journals, business records of Dennis Harris and family memorabilia. Fonds includes records relating to Sir James Douglas, the diary of Martha Douglas kept as a child (with annotations by Douglas), published books owned by the Harris family, and a survey book of Dennis Harris for a CPR survey. Fonds also include 4 photo albums and some loose photographs.