"Siwash Madonna"; a First Nations woman and child on the beach

Each carrying basket on back. Woman smoking pipe. 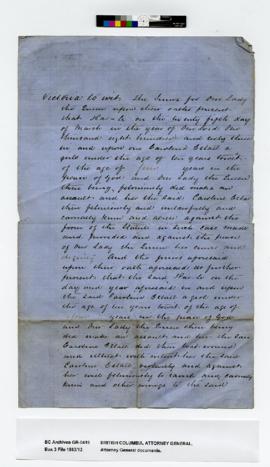 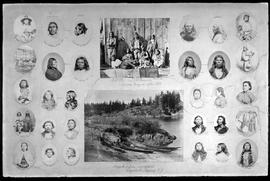 A collection of portraits of native people from different tribes A family outside their home. A party of First Nations along side the SS Baychimo.

The item is a microfilm copy of a thesis by Claudia Louise Lewis titled "A study of the impact of modern life on a Canadian Indian Band." 284 leaves: fig., tables. Thesis (Ph.D.), Columbia University, 1959. Bibliography: leaves 269-2...

The file contains a photocopy of "Aborigines of the Pacific Northwest" by George Henry Griffin of Cortez Island. An Indian encampment on the Fraser River. Encampment of Scachett [sic] [Skagit?] Indians at New Westminster Fraser River Brit. Columbia who came to celebrate the Queens [sic] Birthday and engage in the Canoe Races on that occasion. The blurred figures of an Indian woman, and child, the first separating the childs [sic] hair whose head is resting against the womans [sic] knees, catching the lice, and cracking them between her teeth; I have seen this done very many times F. Dally. CALL NUMBER: T0675:0001 RECORDED: [location unknown], 1964 SUMMARY: TRACK 1: Mrs. Angela McDairmid was born in Princeton before it was known as Princeton; she discusses her earliest memories; where the house was; several anecdotes about her mothe...

The series consists of committee records created by the BC Capacity Initiative (BCCI) Council in 2002 and 2006. The BCCI is a federal government initiative that is funded by Indigenous and Northern Affairs Canada. The objective of the BCCI is to s...

Big timber; Saga of the silver horde; The inside story; Saving the sagas; The life of a salmon; Trans-Canada air pageant pt.1

The item consists of a video cassette tape (VHS) copied in 1990 from a 3/4 inch U-Matic video tape created by the National Archives of Canada in 1989.The contents include copies of six films about various British Columbian topics created between 1... 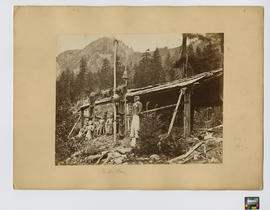 The Squamish Indian People. Essay prepared in association with the North Vancouver School Board.Presented by the B.C.I.L.P., 1976.

Travelogue. Depicts various recreational attractions of BC, including skiing on Mt. Revelstoke, big game, fishing, and a boat cruise on Princess Louisa Inlet. The culture of the Northwest Coast Indians is represented by a teepee, a totem pole and ... Canada : Indian and Inuit communities and languages / produced by the Surveys and Mapping Branch, Dept. of Energy, Mines and Resources ; research and cartography by the National Geographical Mapping Division, Geographical Services Directorate, Surveys and

Correspondence of Edward Sapir, Chief of the Anthropological Division, with James Alexander Teit relating to the ethnology, linguistics, and politics of the British Columbia Indians. Arranged chronologically. Note: No copying without written per...