Television drama. Following the election of Bonaparte John as chief of the Indian band at Namko, a crisis in his life dramatizes the conflict between traditions of the Chilcotin Indians and their adopted Christianity.

Cariboo country. Under the blanket

Television drama. A live CBC television broadcast from Namko -- part of a national program marking Dominion Day -- is jeopardized when one of the participants get wrapped up in an Indian gambling game with Ol' Antoine.

Dramatic short. "A short drama examining the racial conflicts that can occur among children when an "outsider" appears in the midst of a dominant culture. Chris, a pre-adolescent, resents the visit of Emma, a Native girl, to his hom...

Festival : How to break a quarterhorse

Television drama. Ol' Antoine tries to enlist Smith's help in exonerating Gabriel Jimmyboy on a charge of murder at the Williams Lake assizes. In the end Antoine sways the jury with a stirring speech in Chilcotin, and Smith runs afoul o...

SUMMARY: "Saturday Evening" was a series of 1.5 hour programs broadcast from 8:30 to 10:00 PM on Saturday nights. The series ran from October 1962 to the spring of 1967. Usually in two parts, the programs feat;ured plays, classical conce... 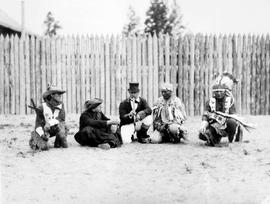 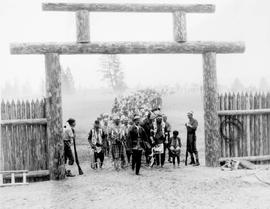 SUMMARY: This episode is a dramatic program about drawing a picture of Ucluelet Bay in British Columbia; the "Beaver", the first steamboat to sail in British Columbia waters, is in the foreground. There is a l;ot of conversation about th...

The Hornby collection : I heard the owl call my name

SUMMARY: "The Hornby Collection" is an anthology of plays, documentaries, interviews and selected fiction for radio -- all written, prepared and produced in British Columbia. A dramatization by David Hutchison of Margaret Craven's ...

The serial : Cariboo country : All Indian

Television drama. Sarah, a Cowichan Indian woman married to Johnny Qua, a Chilcotin, is "kidnapped" and taken to Victoria to be inducted into her band's dance rituals. Includes footage of Coast Salish longhouse and dance rituals.

Television drama. The people of Namko, receiving word of Ol' Antoine's death in Williams Lake, send Smith to town to buy a first-rate coffin and collect the body.

Television drama. Sarah and Johnny's financial troubles take them to Vancouver in an attempt to sell one of Sarah's ancestral heirlooms, a Salish ceremonial copper.

The serial : Cariboo country : The education of Phyllistine. [Part one & two]

Television drama. Ken Larsen persuades Ol' Antoine to allow Phyllistine, a young Indian girl in his care, to attend the white school at Namko, in order to raise enrollment to the required number. But a well-meaning school teacher fails to un...