Sports event coverage. Two thousand BMX bicycle riders from around the world compete at Whistler, BC, in August 1985. 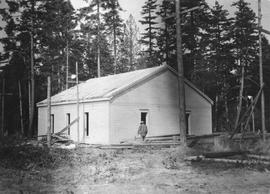 The item is a black and white photograph taken in 1915. It shows the expense magazine.

The item is a black and white photograph taken in 1915. It shows a Toloul storage tank. A 1914 Studebaker on Saanichton wharf opposite James Island in 1917

The item is a black and white photograph taken in 1917 which shows Mr. and Mrs. G.C. Grubb in a 1914 Studebaker on Saanichton wharf opposite James Island.

SUMMARY: Highlights of Canadian history, from Norse exploration to the 1982 Constitution, accompanied by songs and music. See list of contents on cassette label. Produced to accompany the book "A Canadian Story" by Pierre Berton. A group from James Island at the Saanichton wharf

The item is a black and white photograph taken in 1919. It shows a group with a 1914 Studebaker at the Saanichton wharf.Far left: Mrs. G.C. GrubbFar right: J.H. Hall

A history of the Columbia Coast Mission / Richard John Lonsdale

A matter of record

A trip over the Rocky and Selkirk Mountains in Canada

Documentary. "This documentary-type film was made by Edison's troupe during their trip across Canada shooting promotional films for the CPR during the summer of 1910. All but one of the others are dramatic shorts but, alas, most are lost...

A walk through the 20th century with Bill Moyers. The reel world of news

Documentary. Journalist Bill Moyers interviews individuals involved in the newsreel business and presents a history of the newsreel. The only Canadian content is scenes at Dawson City, Yukon, where a museum curator and another person look at some...

The item is a copy of a 1987 inventory on fisheries files prepared by Ira Chaikin from the 80 reels of federal fisheries records at the UBC Government Documents Library.