And-- and Let's go fishing

The item is VHS video containing copies of two films copied from the National Film, Television and Sound Archives, National Archives of Canada in 1986. The first item on the video is the experimental film "And---", made around 1939. Perhaps the first experimental film made in British Columbia, this short uses found footage, painted and scratched emulsion, negative and reversed images, chaotic camera movements, and holes punched in the frame and filled with other images. Some portions are hand coloured.

The second item on the videotape is "Let's go Fishing", an industrial film made by the British Columbia Dept. of Fisheries in 1948. It depicts commercial salmon fishing and canning in BC and includes fish ladders at Hells Gate and Bridge River rapids, the operations of gillnetters and purse-seiners, long, good interior sequence of canning processes (including footage of an "Iron Chink" salmon butchering machine) and cannery workers.

The item consists of a videocassette containing copies of amateur, experimental and television film items made by, attributed to, or featuring Oscar C. Burritt.
Bats out of hell [193-]: Footage of midget racing cars competing at Hastings Park, Vancouver.
Oscar C. Burritt introduces "The Lady from Shanghai" [1969]: Film enthusiast Oscar C. Burritt introduces a television broadcast of the 1947 Orson Welles film. In discussing the Chinese opera sequence in the film, Burritt uses his own photographs of Vancouver's Chinese theatres and opera performers as illustrations.
May Day parade, Vancouver [1938]: Special event footage showing Labour unions, ethnic groups, fraternal organizations and other Vancouver citizens marching in a mass May Day parade; the various groups are identified by signs and banners. Floats and signs depict social conditions and reflect the current world situation, especially the Spanish Civil War and the spread of Fascism in Europe.
Residue 2 [ca. 1939]: Experimental film combining found footage (on mixed film stock) with hand-painted stock and hand-scratched stock leader. No readily identifiable locations are shown.

The collection mainly consists of copies of several short films by Oscar and Dorothy Burritt. The Burritts were film enthusiasts and amateur filmmakers who lived in Vancouver until 1947. Oscar C. Burritt also worked as a professional cinematographer and director. In later years he worked for CBC Television in Toronto. Both the Burritts were active in the film society movement, including the Vancouver Branch of the National Film Society and the Toronto Film Society.

The collection includes footage of Vancouver events and places, as well the amateur or experimental works "And--", "Bats Out of Hell", "Residue 2", "Suite Two: A Memo to Oscar", and "Three There". The collection also includes Douglas Wilson's 1981 oral history interview with Leon C. Shelly, who discusses his career as a film producer in Vancouver and Toronto. It also includes a photograph of a portrait of Dorothy Burritt, painted in 1947 by Peter Bortkus.

The item is an audio interview on three cassettes, recorded in Toronto on December 10, 1981. In it, Leon Shelly relates the history of his involvement in the British Columbia motion picture industry from 1936 to 1945, and discusses his motion picture production activities in Toronto from 1945 to around 1953. 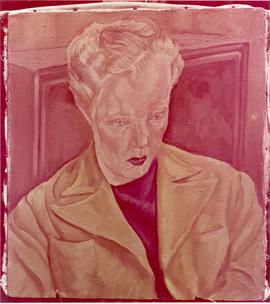 Photograph of a portrait of Dorothy Burritt

The item is a colour photograph of a portrait of Dorothy M. Burritt, which was painted in Vancouver in 1947 by Peter Bortkus.

Suite two : a memo to Oscar

The item is a duplicate print of an experimental film by Dorothy Burritt and Stanley Fox. It was produced as a gift to Dorothy Burritt's husband, filmmaker Oscar Burritt (who was working in Toronto at the time) and is an offbeat study of life at their Vancouver apartment -- suite 2, 1960 Robson Street. The camera explores the apartment and the household memorabilia, and Dorothy is seen sitting for a portrait by painter Peter Bortkus. Later some friends drop by for a screening of Sacha Guitry's film "Pearls of the Crown", followed by a party. Among the guests are Moira Armour, film editor Maureen Balfe, UBC student Stanley Fox, photographer Peter Varley, and an unnamed figure wearing a bird costume. Most of the people shown would have been involved with the National Film Society of Canada (Vancouver Branch). "Suite Two" won honourable mention (amateur category) at the first Canadian Film Awards in 1949.

The item is a VHS video copied from the National Film, Television and Sound Archives, National Archives of Canada in 1986. The cassette contains copies of two films: "Three there", an experimental film from 1940 which shows an impressionistic record of a sojourn on Galiano Island over a Labour Day weekend, with Oscar Burritt, Dorothy Fowler [later Burritt] and Margaret Roberts.

Cinemaorgy from 1955 is an amateur film. It is a record of the Toronto Film Society's visit to George Eastman House in Rochester, New York. Includes re-filmed excerpts from some of the classic films screened for the society members during their visit.