Part of Industrial and economic development films and videotapes

The item consists of a promotional film showing the construction of the coal port in Prince Rupert; the employment potential in exports; the economic impact of rail links to Tumbler Ridge; road access to Chetwynd; coal industry investments and the...

Environment and Land Use Committee Secretariat programme and project files

British Columbia : highway districts, as at April 1, 1978 / drawn and produced by the Map Production Division, Surveys and Mapping Branch 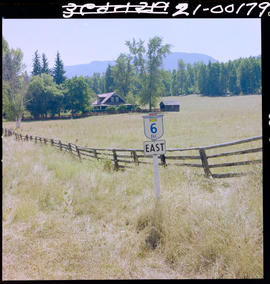 The item is a composite print of a travelogue film from 1974. It depicts the scenic and recreational attractions along the Trans-Canada Highway #1 from Calgary and Banff to Victoria. It updates East 1, West 1.

Correspondence to the Leader of the Opposition

Notes and correspondence from provincial electors to Leader of the Opposition (Barrett) re: such matters as education, health care, highways, and automobile insurance.

SUMMARY: Actuality recording, apparently made on a bus travelling through northwestern B.C. Places mentioned include Stewart, Bear River, the United Empire Mine, the Premier Mine, and Bitter Creek, as well as; an old rail line to the Cassiar gold...

Thomas Frederic Harper Reed (1878-1965) was a surveyor, Indian Agent and telegraph operator in Telegraph Creek, Atlin and Victoria.Records include correspondence clippings and scrapbooks, regarding proposed construction of highways and railroads t...

RECORDED: [location unknown], 1964-07-17 SUMMARY: TRACK 1: Mr. John Kemp recalls his arrival as a HBC man in Canada and his reasons for coming. He offers a description of his journey through BC to Fort Fraser, the first road into the Interior, his...

The file consists of a signed agreement from 1928 between the Province represented by the Minister of Public Works and the Canadian Pacific Railway Company (CPR). The agreement sets out compensation to be paid by the CPR for each level crossing o...

Manual and other material

This series contains records of the Public Education and Information Division. It includes a manual regarding procedures for highway sign crew to paint and maintain forest protection highway signs.

Opening of the road to Bella Coola