Report and evidence taken by the commission to inquire into the management of the Provincial Asylum for Insane, New Westminster

This series consists of a four page report and evidence taken by the commission to inquire into the management of the Provincial Asylum for Insane, New Westminster. Report printed in Sessional Papers, 1883-84, p. 281-282.

This series consists of a three page report and four pages of evidence taken by the commission appointed to examine into the conduct and management of the Royal Columbian Hospital. Report printed in Sessional Papers, 1883-84, p. 283-284.

Correspondence and "Report of an investigation held at the Royal Columbian Hospital on the 13th day of February, 1883"

Correspondence and reports from Department of Provincial Secretary

This series contains miscellaneous correspondence and reports, many of which relate to investigations carried out under the Departmental Inquiries Act and the Public Inquiries Act. Such records relate to conditions in public institutions and acti...

The Provincial Secretary was responsible for the administration of grants to public hospitals, and later regulation of the the hospitals, until the Hospital Insurance Service was established as the third branch of the Department of Health and Welf...

Minute book of the Bella Coola Hospital Board.

This series contains Hospital Programmes Administration files covering the period 1911-1946. Records include correspondence and reports relating to the operations of community hospitals throughout the province. Includes correspondence pertaining...

The fonds consists of diaries, correspondence and miscellaneous papers. Fonds includes photographs of Garibaldi Park and of the Bell Family, as well as copies of prints from the National Archives of Canada and approximately 37 published maps. The... 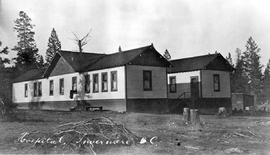 The series consists of photograph files created by the British Columbia Hospital Insurance Service between 1949 and 1974 and including photographs back to 1920. The photographs, mostly black and white prints, are arranged in files alphabetically ...

The item consists of a black and white photographic print of the St. George's hospital on fire. The hospital was in Alert Bay, BC and the fire took place in 1923. This photograph has been matted and may have been hung.

This series consists of a manual containing memoranda, correspondence and forms pertaining to the administration of policy by officials in the Provincial Secretary's Department, 1940-1950.