File consists of one sketchbook belonging to Joan Clark. The sketchbook contains 32 artworks in a variety of mediums (graphite and ink sketches, watercolour paintings) presumably created by Joan Clark, although her signature does not appear on the works. Some of the artworks are titled or otherwise identified. Also included within the sketchbook is one sketch in graphite by Max Maynard (PDP03219) which is signed M. Maynard and dated January 9, 1940. The Maynard sketch is the only item within the sketchbook described at the item level. 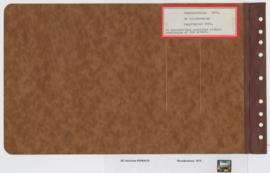 Item consists of one album containing 41 diagram-style sketches in crayon and ink created by David Henry Norcross. Norcross was born in Granite Siding (or Granite) near Nelson, BC, and began his mining career at age 16. The drawings document his memories and history of mining and mining technology in British Columbia, particularly within the Kootenay district.

The scrapbook contains 28 pencil and watercolour sketches. 27 of the sketches are portraits, some of which are identified by name and others are untitled. There is also 1 watercolour landscape, depicting the front of a boat with totem poles in the background. There are a variety of newspaper clippings interfiled throughout the scrapbook. The sketches and newspaper clippings have various different dates, ranging from 1908 to 1923. Many of the sketches are undated, but assumed to fall within this range.

A number of the portrait sketches appear to be of individuals that Maclure was acquainted with as she identifies them by name. The identified individuals and/or titled works include: Mrs. Henry Hannington; Mrs. Home; Grace Wood Jess; Cathie; Lord Charles Beresford; Dean Davenport; the Bishop of Columbia; Kitty; Miss Denne [sp?] Parker; and A Lady of Decided Opinions. There are also a number of portrait sketches of unnamed Indigenous people. Although the individuals are not named, Maclure often includes inscriptions about the subjects of the drawings.

Also filed within the scrapbook is one handwritten obituary about Margaret Maclure (1938, author unknown) and one photograph copy print of one of Maclure’s sketches.

Postcards from the Pandemic

The file consists of 540 individual postcards that were created by the artist collective BOXCARSIX in the Victoria region during the COVID-19 pandemic between 2020 and 2021.

Postcards from the Pandemic is a collaborative mail art project of over 900 postcards that were created by artists in and around Victoria, BC in the depths of social lockdown created by the COVID-19 pandemic. The project was begun in March 2020 by members of BOXCARSIX Artist Collective to stay connected during lockdown. Each artist initiated a series of postcards leaving space in each one for another person to add and respond to. Each card was then mailed on to another artist to add to and potentially complete the postcard.

Each postcard has been assigned its own unique PDP number and is stored in its own folder. See finding aid for container descriptions.

Item consists of one album containing 27 watercolours created by Commander Edwin Augustus Porcher. Each watercolour is inscribed with ink and indicates the location and date. The artist's name is inscribed in ink on the upper cover. File consists of one album, which contains 98 graphic works (lithographs, drawings, watercolours, and one photograph). Affixed plates at the front of the album identify the contents as "The St. Helena Collection, 1826" and "The India Collection, 1858."

The file consists of one hardcover folio, which contains 19 loose artworks created by various artists associated with the Island Arts and Crafts Society (IACS). The portfolio is inscribed with the name "Mrs. N.P. Shaw". The portfolio was presented to Ella Gertrude Shaw, nee Lugrin (Mrs. N.P. Shaw) in March 1925 upon her departure from Victoria to Vancouver. Shaw was a founding member of the IACS and exhibited from 1910-1922 at the Society's annual exhibitions.