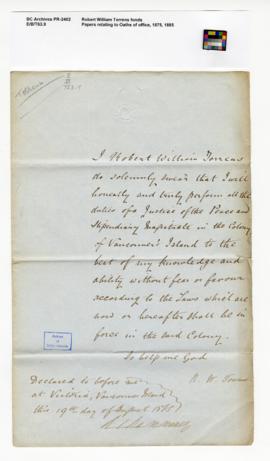 Papers relating to the oaths of office

The file consists of Torrens's oath of office upon becoming a Justice of the Peace and Stipendiary Magistrate in the Colony of Vancouver Island, as well as his oath of allegiance to Queen Victoria. The file consists of one letter from Torrens in 1859. The letter lacks an addressee, but may be written to Douglas. Torrens writes from Haida Gwaii, and it is likely that the letter was written during his "expedition to the North." The letter makes further mention of his time in Skidegate and his interactions with the Indigenous peoples there as well as his impressions of the geology, flora and fauna of the area. Correspondence relating to recommendations and applications for positions

The file consists of several pieces of correspondence written by Torrens, as well as several letters written to recommend him for various positions in the colonial government or as letters of introduction. Correspondence regarding mining lease for George Weavers and partners

The file consists of one letter written by Torrens to the Colonial Secretary regarding a mining lease application by George Weaver and partners for permission to mine in the Cariboo. Excerpts and notes of expedition to the North, 1859

The file consists of two copies of a typed transcript of notes detailing Torrens' 1859 trip. The excerpts are dated between 1 July to 31 August 1859, with a single-line entry from 1 October 1859. The covering page is entitled "Nass Dialect" and includes a list of words in Nisga'a and English, including numbers 1-20. Report of explorations and proceedings at Clayoquot Sound

The file contains two reports written in 1865 by Torrens and sent to the Honourable William A. G. Young, Colonial Secretary. The first report was written in August 1865 and describes his trip to Bear River, which was cut short. The second report is dated September 1865 and provides lengthy detail about Torrens's trip to Nootka Sound and Friendly Cove following the aborted trip to Bear River. Torrens writes at length about the geography, geology, flora and fauna of the area and provides a detailed description of the trip.

In his September report, Torrens makes several comments on the Indigenous peoples and villages that his expedition encountered, including the villages of Maktassis on Flores Island (likely Marktosis/Maaqtusiis), Oupinit (likely Openit), Ouchucklesit, Sleeptic, and Tsumakose near Refuge Cove, the latter noted as being a village site for the Manahoussat people. Torrens also met with Imharp, whom he names as the chief of the Mowachaht peoples. Torrens attached several appendices to his report, including a vocabulary, a story he has entitled "Indian Superstitions" and a list of the villages of the Mowachaht, Muchalaht, Nuchatlaht, Ehattesaht (ʔiiḥatis), Kyuquot (Ka:'yu:'k't'h'), Cheklesath (Che:k:tles7et'h') and Cla-issat First Nations. 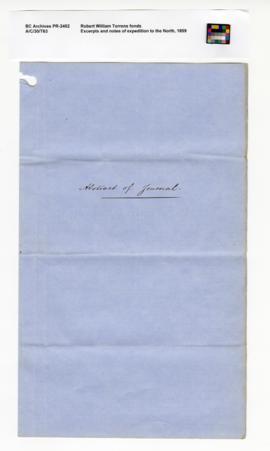 Journal of expedition to the North, 1859

The file consists of both the abstract and the report Torrens sent to James Douglas in 1859 regarding his trip to Haida Gwaii and inland along the Nass River. The trip took place between 1 July to mid October 1859. The report mentions interactions with the local Indigenous population on Haida Gwaii. Several Indigenous men are named, including Naskilkengans, Nestacana, Mr. Charles, Tatsai, and Kitkuhn. Naskilkengans and Nestacana appear to have been from the Skidegate area; the home village of the other men is not provided. Torrens also writes at length about the geological composition of northern British Columbia, including along the Nass River and on Haida Gwaii. He also includes his general impressions of the Indigenous peoples that his expedition met.

Torrens's abstract includes a daily assessment of the weather and general remarks. 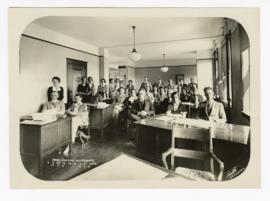 The item is a black and white photograph of the staff at the Income Tax Branch in Edmonton, Alberta in 1933. The photo was taken when Gunderson was working there. He is believed to be standing in the centre of the photograph towards the back of the room. 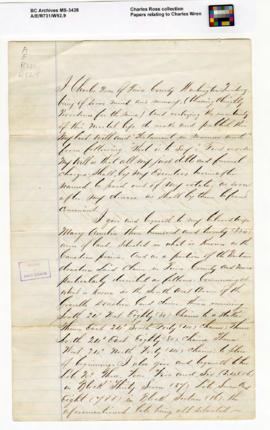 The file consists of a variety of papers relating to the life of Charles Wren, including a copy of his will, correspondence, indentures, power of attorney, receipts, mortgages, agreements, and notary public records. The majority of the records are from Washington State. 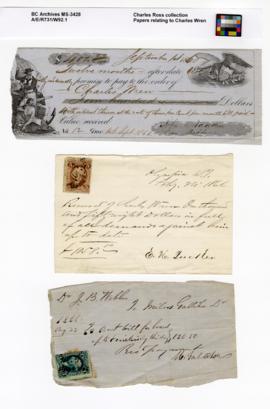 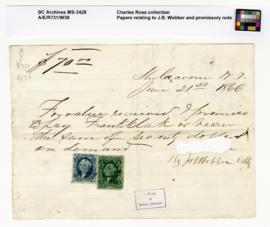 The file consists of one promissory note made out by J.B. Webber to Frank Clark.

The relationship to Charles Ross is unknown. A Dr. J.B. Webber appears in file A/E/R731/W92.1 and appears to have known Charles Wren. 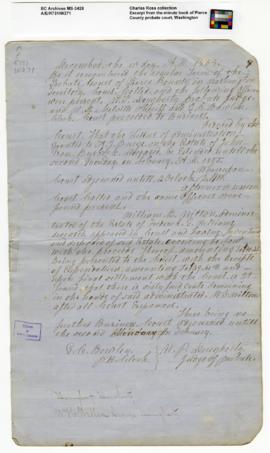 The file consists of pages taken from the minute book of the probate court in Pierce County, Washington. It is unclear how the pages made their way into the Charles Ross collection, but many of the names mentioned in the minutes appear elsewhere in Wren family records. The judge and clerk of the court appears to have been a Mr. W. P. Dougherty; this may be William Pagan Dougherty, father of Annie Wren's husband, George James Dougherty.

The pages appear to have been intentionally torn out of a bound volume and saved.

The file consists of two volumes of "The Free Thinker," a handwritten newsletter or journal produced at the Washington School District No. 2 in 1869. The newsletter includes anecdotes, poems, thoughts on school, an ode to the autumn, and stories. There are two editions; only one is dated. The "editor" appears to have been G.J. Dougherty. Both appear to have been written when Dougherty was in school. 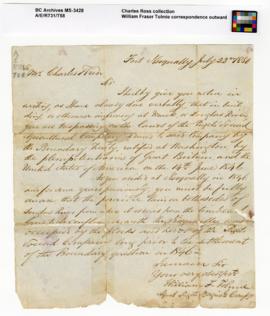 The file consists of one letter written by Tolmie to Charles Wren in 1850. The letter was written at Fort Nisqually and gives written notice to Wren that he is trespassing on the lands of the Puget Sound Agricultural Company.

Charles Wren was the son-in-law of Charles Ross and Isabella Mainville. 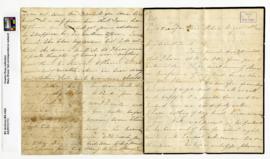 The file consists of two letters written by Mary McKenzie (Ross) Tait, who appears to have been the niece of Charles and Isabella Ross. The letters are addressed to her "dearest uncle," but it is unclear if these letters were sent to Charles Ross or another brother. The 1842 letter was written at 13 Barrossa Place, Chelsea, London, where Charles's son Walter later resided for a time. The letters deal with personal business. The "Walter" referred to in Tait's 1842 letter is likely either her husband, Walter Tait, or her brother, Walter Phipps Ross. 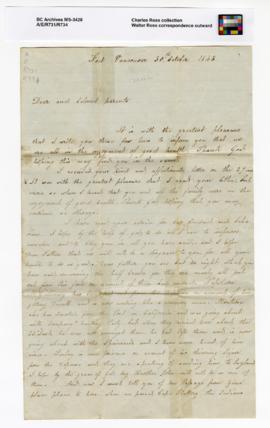 The file consists of a letter received by Charles and Isabella Ross and written by one of their children. The end of the letter has been ripped off, but it has been attributed to Walter. The letter is dated at Fort Vancouver, 30 October 1843. The letter is personal in nature and mentions several of the Ross' acquaintances, as well as the Ross boys' upcoming passage to England.

Although the dates are slightly incongruent, the letter appears to be a response to Charles Ross's letter dated 30 September 1843 (see file A/E/R731/R731). The file consists of one letter written to a Mr. Ross by Flora Ross. The letter was written at New Westminster in July 1893. In it, Flora asks if the recipient is likely to be in New Westminster, and if he would call to see her. 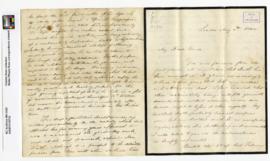 The file consists of one letter written by Walter Phipps Ross to his "dear uncle." Walter Phipps Ross is believed to have been the nephew of Charles and Isabella Ross, but whether or not the letter was sent to Charles Ross or another of his brothers is unclear. The letter is personal in nature, and describes the suicide of Alick, Walter Phipps Ross's brother, and the death of his mother, Janet. 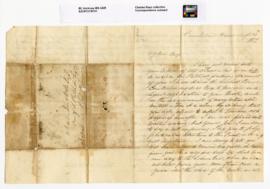 The file consists of two letters written by Charles Ross to his sons, John and Walter and were written in 1837 and 1843. 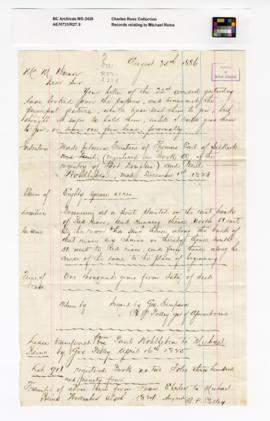 The file consists of a variety of records relating to Michael Reine and his son, Michael Reine Jr. They were likely the father and brother of Charles Wren, who married two of Charles Ross and Isabella Mainville's daughters. The records are in both English and French, and relate to a variety of matters, including work for Lord Selkirk, land exchanges and claims, and military service. 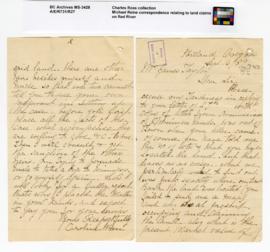 The file consists of correspondence relating to a variety of land claims at Red River. The correspondence is all regadring Michael Reine. Reine's name is spelled variously as Reine, Reind, Rhenne, Rhyne, and Ryne. He was likely the brother to Charles Wren, who married two of Charles Ross and Isabella Mainville's daughters. 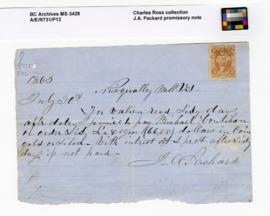 The file consists of one promissory note written by J.A. Packard to Michael Houlihan for the sum of $66.55. The note was written at Nisqually in 1863.

The connection between Packard, Houlihan, and Ross is not clear. 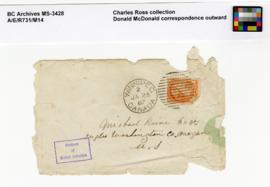 The file consists of one letter written by Donald McDonald to Michael Reine in 1887. The letter relates to a land issue and commentary on McDonald's family.

Michael Reine may have been the brother of Charles Wren, who married Charles Ross and Isabella Mainville's daughters, Mary Amelia Ross and Elizabeth Ross. The file consists of one grant for a marriage license between John Goodacre and Flora Wren in 1874. Flora Wren was the granddaughter of Charles Ross and Isabella Mainville by their daughter Elizabeth. 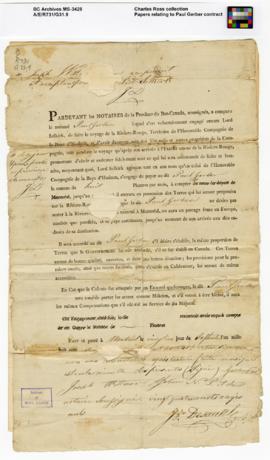 The file consists of one original document relating to the contract of Paul Gerber. The document was written in Montreal and is in French. The file also contains a handwritten translation; the year of creation of this translation is unknown. Gerber was engaged by Lord Selkirk to undertake a voyage from Red River.

Paul Gerber's connection to Charles Ross is not clear. 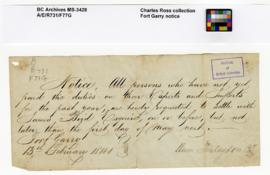 The file consists of one handwritten notice from Fort Garry. The notice is dated 13 February 1841 and is signed by Chief Trader Duncan Finlayson. The notice relates to paying export and import duties. 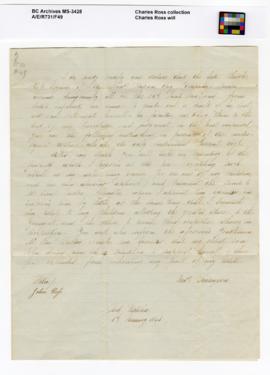 The file consists of a declaration made by Roderick Finlayson in January 1845 regarding the disposal of Charles Ross's estate. When Ross died in 1844, he did so without a will. Finlayson indicates that Ross was unable to make out a draft of his last will and testament, but rather dictated his instructions to Finlayson. Ross instructed Finlayson to inventory his possessions and send many of them to Chief Factor James Douglas, whom Ross appointed as executor. The bulk of Ross's estate was bequeathed to his children, with the youngest child receiving the largest proportion of the estate, and the eldest - John Ross- receiving nothing.

The declaration was signed at Fort Victoria on 10 January 1845 and witnessed by John Ross. 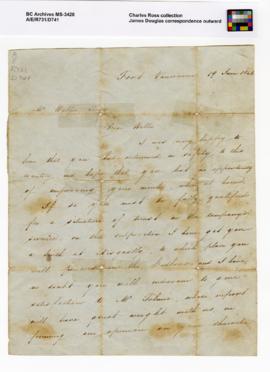 The file consists of one letter written by James Douglas to Walter Ross, son of Charles and Isabella Ross. The letter was written at Fort Vancouver in June 1846 and references a post at Fort Nisqually. 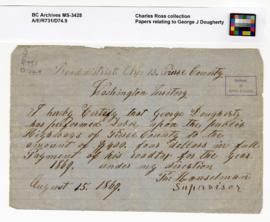 The file consists of a record relating to the marriage of Annie Wren (granddaughter of Charles Ross and Isabella Mainville) and George James Dougherty, as well as an 1869 receipt for labour performed by Dougherty.