The series consists of return of summary convictions and preliminary hearings created by the Williams Lake Magistrate's Court from January 1923 to August 1924. The volume also contains lists of Justices of the Peace and Stipendiary Magistra... 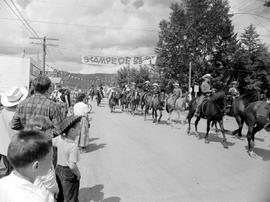 Probate/estate files. The 1947-1961 probates are still in the registry.

This series contains correspondence, charts, plan map and report relating to the creation and staffing of the Cariboo Forest District. Types of records include a floor plan of Williams Lake headquarters, (1969), a report on the re-establishment o...

The item is a composite print of a travelogue film from 1973. It contains footage of aspects of the province as seen in Beautiful B.C. Magazine; the British Columbia Boys Choir is featured. Also includes sequences on the Cariboo-Chilcotin region; ...

Princess in wonderland : out-takes, reel no. 4

The item is a film reel of out-takes from 1958. It contains footage of the royal visit by HRH Princess Margaret and centennial celebrations in BC. Footage includes: Victoria airport arrival and salute; drive into Victoria; arrival at Empress Hote... The series consists of Williams Lake divorce case files from 1935 to 1947.