This series consists of the report of the Commission on South Park School Drawing Books, 1905-1906.

This series consists of copies of telegrams sent by registrar of the Victoria Supreme Court, 1899-1912.

This series contains minutes from the Executive Council meetings. Records of interest in this series include minutes "relative to the Indian troubles on the Skeena River," from 1888.; dispatches, reports, and correspondence concerning t... 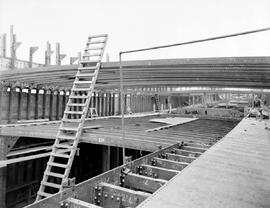 Sheriff's receipt book for cases in all courts at the Victoria Court Registry, 1879-1883.

Presentments of the Grand Jury

The fonds consist of a series of drawings by Ottawa architect G.F. Stalker under the pseudonym Alma for the 1892 competition to design the British Columbia Parliament Buildings. Although the plans are numbered from 1 to 15, only 13 plans were dona...

The fonds conists of four notebook diaries kept by Thomas Frederick Seldon between May 12, 1898 and November 10, 1899 recording his experiences while travelling to the Yukon Territory via the Teslin Route, including the Stikine River, and mining a... The fonds consists of the records generated by the Asian Art Society of Victoria between 1977 and 1988 in the course of its meetings, social events, volunteer and fund-raising activities, tours, classes, sponsored lectures and art exhibitions in V...

The item is a film news reel from 1939 of the visit of King George VI and Queen Elizabeth to Canada and the United States. "The Castle Films production of the entire visit is [black and white] and is about 360 feet long. The sections filmed ...

The item is a reel of documentary film from 1976. "Nutrition is probably the most important factor in maintaining good health. With this in mind, O'Linda Daycare Centre in Victoria outlines how they practice good nutrition in their dail...