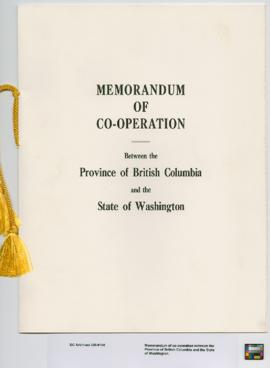 The item consists of a two page memorandum of co-operation dated July 10 1972. The memorandum is signed by Premier W.A.C. Bennett and Washington State Governor Daniel J. Evans and is an agreement to protect the common water boundary consisting of the Strait of Juan de Fuca, the Strait of Georgia, Puget Sound and their adjacent waters from the dangers of oil spills.