Bruce Alistair McKelvie (1889-1960) was born in Vancouver. He worked as a reporter for the Vancouver Province and later became Managing Editor of the Daily Colonist in 1930. He wrote a number of books on the history of British Columbia and was i...

Correspondence inward to the Chief Commissioner of Lands and Works, Colonel R.C. Moody. Consists largely of letters from Governor James Douglas and the Colonial Secretary pertaining to town lots, other lands, trails and roads, and other public wo...

British Columbia: Entry Books of Correspondence, 1 July 1858 - 11 August 1871 (C.O. 398, Vols. 1 - 7). Unit consists of letter-book copies of despatches to the governors of British Columbia from the Secretary of State for the Colonies, along with...

Vancouver Island: Entry Books of Correspondence, 1849-1867, (C.O. 410, vols. 1-2). This unit consists of letter-book copies of despatches from the Secretary of State for the Colonies (i.e. the Colonial .Secretary) to the governors of Vancouver Is...

Seven letters from Edward Ellice, M.P. and members of the committee appointed to look into the affairs of the Hudson's Bay Company, discussing HBC interests in British Columbia and on the prairies; scrapbook containing miscellaneous clippings...

Correspondence inward and other papers The series consists of correspondence out from Fort Vancouver, 1846-1848, signed by Peter Skene Ogden and James Douglas. The records consist of originals, borrowed transcripts and transcript copies. Almost all of the letters are addressed to Dr.... Correspondence, research notes and other material

Series consists of correspondence inward, reminiscences, diary of a trip through the Cariboo to Stuart Lake (1913); research notes and drafts of Howay and Scholefield's History of British Columbia.

Establishment of servants, Columbia District out

The series is a bound journal containing 92 pages, originally created by James Douglas in 1839 when he was stationed at Fort Vancouver. The first ten pages contain lists of "gentlemen and men" associated with various HBC forts and vesse... The item consists of a record book kept by Chief Factor John McLoughlin in 1837 at Fort Vancouver for the purposes of recording marriage licences. Entry no. 1 records the marriage licence of James Douglas and Amelia Connolly, dated February 27, 1...

The fonds consists of accounts, correspondence, fur returns, a register of marriage licences and a letter book created by various Fort Vancouver Hudson's Bay Company officials between 1832 and 1858. Most of the correspondence consists of bot... 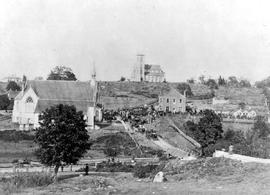 Funeral of Sir James Douglas, at the Church of our Lord, corner of Blanshard and Humboldt Streets, Victoria; Sir James donated the land the church was built on

Christ Church Cathedral in the background.

Series consists of a diary, 1868; correspondence, 1898-1910, with R. Gosnell, E.O.S. Scholefield and R. Mohun; oaths of office; printed vita to accompany application to be appointed Governor of British Columbia, 1869; notes and drafts on history o...

Memorandum by Colonial Office officials entitled "The Royal Engineers in British Columbia."Copied from the originals (CO 325/48) in the Public Record Office January 1978.

RECORDED: [location unknown], 1962-03-27 SUMMARY: TRACK 1: Mr. Smith talks about his father's Victoria hardtack business; May 24 celebrations in Esquimalt; visit of the Lord Dufferin; his father's bakery supplies for the Royal Navy and t...

The collection consists of six letters by James Douglas to James Yale or Donald Manson, three agreements between the Hudson 's Bay Company and four employees, and a bill of lading for the Hudson's Bay Company ship Cadboro.