RECORDED: Mackenzie (B.C.), 1974-12-06 SUMMARY: Mr. Allan Sheppard, the first mayor of Mackenzie, BC, discusses the development of the town, including his recollections of its birth and early years as an "instant town" in the 1960s.

RECORDED: [location unknown], 1974-09-10 SUMMARY: Born in Norway in 1908; came to Canada in 1927; worked at Great Central Lake for Bloedel, Stewart and Welch; logging camp life; conditions during the Depression; union organisation during the 1930s; strike of 1934; worked for several companies on Vancouver Island; accidents in the woods; started with BCFP in 1946; worked in several coastal camps as foreman and later superintendent; in several BCFP camps on Vancouver Island and the lower coast; problems faced by a logging superintendent in the 1940s and 1950s; changes in logging methods. 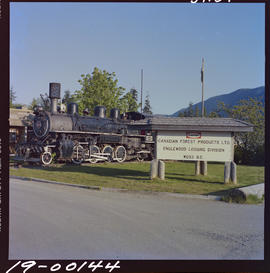 News item. Interview, and shots of logs being lifting from booming grounds into a barker at BC Forest Products's Sooke Division.

The collection consists of interviews with employees and management about the history of British Columbia Forest Products.

Fonds consists of administrative and operating records of British Columbia Forest Products Limited in British Columbia between 1946 and 1986, pertaining particularly to plywood production, 1952-1986. Incorporated are records of predecessor companies including Industrial Timber Mills of Cowichan Lake and Douglas Plywood of Vancouver. The fonds illustrates the operating data and composition of working documentation for single plant operations that formed part of a multi-plant company. The fonds is comprised of the records of two of the corporate divisions involved in plywood production: Victoria Plywood and Sawmill and Delta Plywood. Topical files, financial statements, working files, equipment documentation, ledgers and registers, technical drawings and cartographic material predominate. Content pertains to all aspects of division and plant operations including, but not limited to, products, finances, suppliers, clients, markets, partners, facilities, equipment, supplies and human resources. Records from the Victoria Plywood and Sawmill division pertain to operations at Victoria, BC. They were created between 1942 and 1988 and are in three series: 1. Manager's Office files, ca.1950 to 1988, ca. 3.5 metres; 2. Accountant's Office files, 1942 to 1987, ca. 4 metres, and; 3. Cowichan District plans and drawings, ca.1950 to ca.1975, ca. 120 items. The Cowichan Division operated an affiliated veneer plant and sawmill at Youbou on Cowichan Lake, BC. Records from the Delta Plywood division consist of operating files for the plant at New Westminster, BC and pertain to administration and finance. Series are: 1. Administration,1970-1985, ca. 1.5 metres; 2. Accountant's Office, 1972-1985, ca. 3 metres and 3. Douglas plywood project financial files. Alphabetical-chronological filing arrangements have been retained and reconstructed. The fonds also contains a scrapbook of construction photographs.

This series contains a copy of a brief submitted to the Royal Commission on Forest Resources by British Columbia Forest Products.

SUPPLIED TITLE OF TAPE(S): Logging Superintendent, BCFP RECORDED: Vancouver (B.C.), 1974-06-13 SUMMARY: Born in 1912, in Midale, Saskatchewan; schooling in Weyburn; Ed and his brother came to Cowichan Lake in 1934; jobs splitting wood for a steam donkey; join back rigging crew; worked at various woods jobs at Camp 6, Caycuse, BC; early union efforts at Caycuse; later woods foreman at Caycuse and logging superintendent at Cowichan; due to retire in 1975.

SUPPLIED TITLE OF TAPE(S): Head sawyer, Hammond Mill, BCFP RECORDED: Maple Ridge (B.C.), 1975-02-26 SUMMARY: First job in 1944 at the Hammond Cedar Co.; returned to Hammond in 1947; learning how to saw; changes in equipment; methods of operation; descriptions of job and types of decisions made on logs; quality of logs; production in the mill.

SUPPLIED TITLE OF TAPE(S): Master mechanic in the forest industry RECORDED: [location unknown], 1974-06-05 SUMMARY: Born in England in 1902; came to Victoria in 1911; started work for Cameron Lumber Company in 1927; worked as a machinist and engineer; worked in logging camps in the Nitinat area in 1922; description of logging camps; machinery at the Cameron mill in Victoria; employees; types of machinery used and technological changes; retired as a master machinist in 1967.

SUPPLIED TITLE OF TAPE(S): Retired as Superintendent, Victoria Saw Mill, 1973 RECORDED: [location unknown], 1974-06-04 SUMMARY: Started in a bank as a teller; because of health, went to Barnet Lumber Company's mill in 1926, until it closed during the Depression; conditions during the Depression; no job for two years; obtained job at Industrial Timber Mills in Youbou grading lumber; then the Pacific Lumber Inspection Bureau; assistant to the superintendent in Youbou; superintendent at Victoria in 1950.

News item. The Pulp and Paper Workers of Canada (PPWC), Local 2, pickets the B.C. Forest Products mill on Gorge Road, forcing management to close the mill. IWA members are upset, as the Henry Hutchins report on the forest industry is to be released in three days. IWA members want to return to work if the terms of the report are satisfactory. Even so, the PPWC pickets will be honoured by IWA members, and this means no unemployment insurance.