Journal written by Archibald Menzies during his term as surgeon accompanying Captain George Vancouver on his voyage from England to the Northwest Coast. He records items of astronomical, meteorological, zoological and botanical significance, as w...

Great Britain. Board Of Trade.

Extracts of minutes recording an examination of John Mears relative to his activities in the fur trade on the northwest coast of North America, correspondence and a memorial presented by Alexander Mackenzie seeking rights to establish a fur trade ...

Great Britain. Board of Trade

Correspondence relating to instructions and supplies for Vancouver's expedition, 1791 and negotiations between Quadra and Vancouver at Nootka, 1792-1793. (CO 5/187).Copied from originals in the Public Record office, London.

"...the most necessary remarks and observations in a voyage made on board ship Jefferson, Josiah Roberts Commander from Boston, North America to the North West Coast of the Same and round the globe".Purchased from Massachusetts Historica...

Copies of the manuscript of the first report of Captains Galiano and Valdes regarding the Strait of Juan de Fuca and the Circumnavigation of Vancouver Island in the schooners Sutil and Mexicana, 23 October 1792. Original in the Archivo General de...

Account of the discovery of a group of islands in the North Pacific Ocean by Captain James Magee in the ship Margaret of Boston extracted from his logbook, 1793.Purchased from Massachusetts Historical Society, 1975. Presented to Provincial Archiv...

Series consists of Captain Roberts' log, 1793, and Bernard Magee's journal, 1793 of voyage on ship Jefferson to the Northwest coast of America.

The fonds consists of the diaries, correspondence, notebooks, survey field books, accounts, business and personal papers, photographs, watercolours, maps, and ephemera created by members of the O'Reilly family between 1830 and 1992. These re...

Series consists of a copy of the log and a journal of the voyage of the ship Eliza from Boston to the Northwest Coast of North America from the William Sturgis papers at the Massachusetts Historical Society. The journal, published as The Journal ...

Will, inventory of estate and effects, and contre-lettre of John Dease (1801); engagement of Peter Warren Dease to Alexander McKenzie and Company (1801; engagement of Francis Dease with Myer Michaels (1801); diary of John Warren Dease at Fort Vanc...

Records of the Russian American Company

Despatches and reports of foreign missions in the United States of America relating to settlement in the Pacific northwest and Hudson's Bay Company claims to Oregon territory. (P.R.O., F.O.5).Copied from originals in the Public Record Office,... 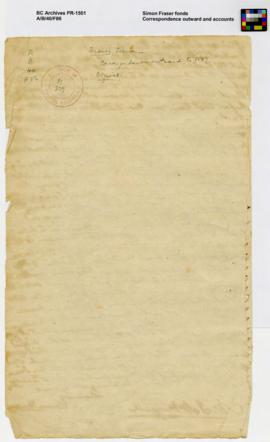 The series consists of four copybook letters written by Simon Fraser in 1806 and 1807 while he worked for the North West Company. The letters are written in the same incomplete volume containing various Fort Liard (NWT) accounts created between 1...

Correspondence relating mainly to Simon Fraser and an atlas produced by Denton; notes and a typed manuscript relating to Simon Fraser, plus several copies of Fraser's 1806 and 1808 journals and letters 1806-1807. There are notes on the fur t...

Extracts from William Martain's log of the 1809-1812 fur trading voyage of the ship Hamilton. Includes references to ship Tonquin.Copied from originals in the Essex Institute, Salem, Mass.

Correspondence and reports relating to possessory rights in Oregon, the San Juan boundary and the establishment of a transcontinental telegraph. (F.O. 115/20 to F.O. 115/172).Copied from originals in the Public Record Office, London.

Arthur Nonus Birch (1836-1914), the son of H.W.R. Birch, was appointed clerk in the office of the secretary of state for the colonies in February 1855, served as Sir Edward Bulwer-Lytton's assistant private secretary in 1858, and Chichester F...

Series consists of a family register and diary, 1815-1904, consisting of notices of births and deaths of Marcus Smith and his wife and children, obituary notices of Marcus Smith, and extracts from his diaries copied in 1896; [A00856]; various docu...