Correspondence and miscellaneous papers pertaining to various members of the Crease family.

Copies of registers of baptisms, marriages and deaths kept at Fort Vancouver, Fort Victoria, Fort Langley, and the Parish of Victoria. The original dates of the records are 1836 to 1886 while the photocopies and transcripts were probably made aro...

Certificates of baptism and other material

These records relate to McKay's career as a chief trader for the Hudson's Bay Company including correspondence, a journal, notes regarding festivals and traditional beliefs of the B.C. Indians and his recollections as Chief Trader. 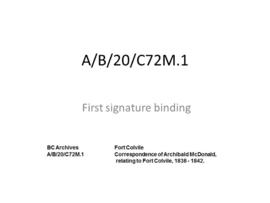 The series consists of two letterbooks created by Archibald McDonald from April 1838 to August 1841 and from August 1841 to May 1842. The books contain McDonald's correspondence copies to Hudson's Bay Company officials and officers and ... 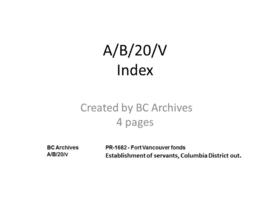 Establishment of servants, Columbia District out

The series is a bound journal containing 92 pages, originally created by James Douglas in 1839 when he was stationed at Fort Vancouver. The first ten pages contain lists of "gentlemen and men" associated with various HBC forts and vesse...

The series consists of hydrodgraphic charts produced by the United States Coast and Geodetic Survey and other official American chart- producing agencies. The charts are listed alphabetically by title in the chart list.The charts have been copied ... 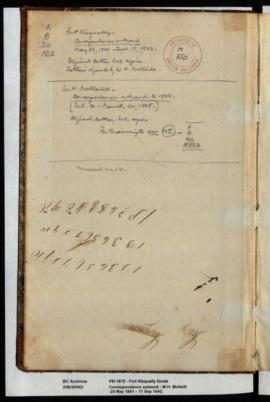 The series consists of a volume of letterbook copies of outward correspondence kept by Captain W.H. McNeill while based at Fort Nisqually 1841-1842. Most of the letters are to John McLoughlin or James Douglas at Fort Vancouver and detail the work...

Part of Diocese of Victoria fonds

Letter and journal for 1843 and 1845 relating to the mission of the Columbia. Translated from the printed French version under the auspices of the Works Progress Administration (Seattle: Project No. 4185 and 5606) in 1937.

Correspondence outward (17 letters) written during his service with the Royal Navy in the Caribbean and off the east coast of South America; one incomplete letter dated 2 June 1850 from an unidentified correspondent.

Standing rules and regulations of the H.B.C.'s fur trade established by the Council for the Northern Department of Rupert's Land.Presented by J.A. Pearce, 1974.

Correspondence inward from his brother, Charles Dodd, at Fort Stikine, describing the murder of John McLoughlin Jr. and giving an account of his service with the Company in charge of Fort Stikine.

Series consists of a log kept by Thomas Robinson (personal attendant) who traveled with Governor Richard Blanshard to Vancouver Island in 1849; two colour photos of log (open and closed).