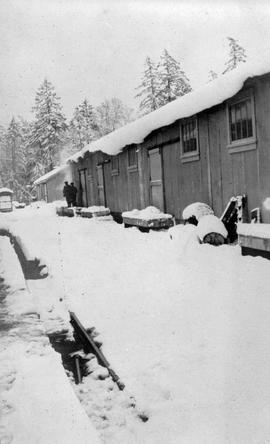 The item is a black and white photograph taken in the winter of 1916. It shows the store.

It required a lot of labour to keep tram lines open. 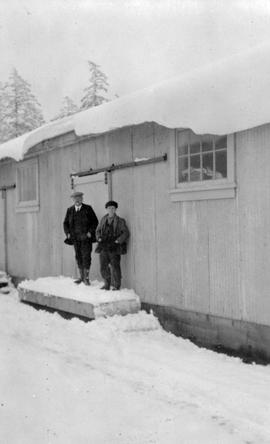 The item is a black and white photograph taken in the winter of 1916. It shows the store.

The collection consists of video copies of 36 film items from the Allan D. Taylor collection held by Library and Archives Canada. These selected items (mainly newsreel footage and out-takes) depict British Columbia events, leisure activities, scenery and cityscapes in Victoria and Vancouver, on Vancouver Island, or in the Interior (for example, Kamloops and Lillooet), during the period 1907-1931. Several items filmed during World War One show events related to the war, including the departures of various military units for the conflict. The collection includes at least one item fillmed by Vancouver filmmaker A.D. "Cowboy" Kean, and a few others that are attributed to him.

The series consists of hydrodgraphic charts produced by the United States Coast and Geodetic Survey and other official American chart- producing agencies. The charts are listed alphabetically by title in the chart list.

The charts have been copied onto 105mm microfiche which are arranged sequentially according to the call numbers cited in the chart lists. Some of the dates presented should be considered tentative, since some of the charts, particularly some from the 1850s, may be undated reproductions of official charts. Researchers should also note that the charts listed with dates from the 1840s are 1971 reproductions of 1940s items. Background information on early American hydrographic surveying can be found in Peter J. Guthern. United States Coastal Charts, 1783- 1861 (NW526.99/G984). Additional related information is provided in United States Coast Survey. Pacific Coast. Coast Pilot of California, Oregon, and Washington Territory. 1869 (NW527/U58p/c.2) and in United States Coast and Geodetic Survey. Pacific Coast. Coast Pilot of California, Oregon, and Washington. 1889 (NW527/U58p.4/ c.2). 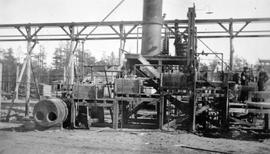 The item is a black and white photograph taken in 1917. It shows the plant where ammonia liquor was purified.

Nitrate of ammonia is one of the ingredients of many dynamites. Before the war CLX obtained their supply from Europe and the U.S. By 1917 the cost was high and the supply scarce. We therefore built a small plant for the manufacture of it on the island. Crude ammonia liquor (15-20%) was purchased in drums from the gas works of Vancouver, Victoria and Seattle. Weak nitric acid (50-55%) was run thru glass line from our nitric house 600' away. From the two we made the nitrate of ammonia for CXL Dynamite plant at Nanaimo. 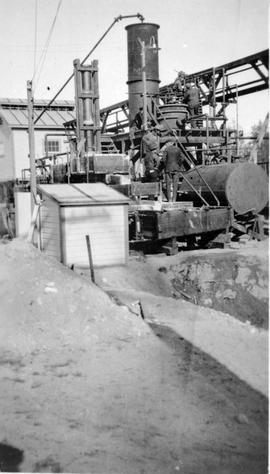 The item is a black and white photograph taken in 1917. It shows the plant where ammonia was purified.

The item is a copy of an essay (typescript) by researcher Isobel Harvey entitled "An historic review of the social services of the government of British Columbia." Prepared as a prelude to the 1947-1948 Annual Report of the Social Welfare Branch.