The Bayliff family were owners of the Chilancoh Ranch near Redstone, Chilcotin district. The ranch was started by Hugh Peel Lane Bayliff who after being educated at Clifton College, emigrated to British Columbia and worked on ranches (Roper'...

Correspondence inward and other papers

Series consists of Roberts' notes for sermons and his personal bible.

Medical certificates, correspondence and other material

Medical certificates, testimonials, diplomas, correspondence, 1863 and 1865, and commissions appointing Helmcken to the Legislative Council and Executive Council of British Columbia, 1867-1869.

Two letters from George Abernethy (1847) of Oregon City regarding timber sales; one receipted invoice, Hudson's Bay Company, Honolulu (1847); one letter of thanks from James Alexander Forbes, Santa Clara (1846); one letter from James McKinlay... 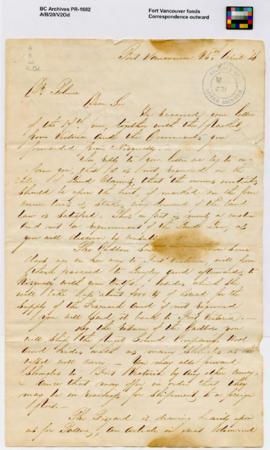 The series consists of correspondence out from Fort Vancouver, 1846-1848, signed by Peter Skene Ogden and James Douglas. The records consist of originals, borrowed transcripts and transcript copies. Almost all of the letters are addressed to Dr....

Series includes correspondence, diaries, personal and business records, including papers of his grandfather, Robert Ker, and father, David Russell Ker, who was president of Brackman and Ker Milling Company, and who retained some of the records of ...

Correspondence relating to the Colony of Vancouver Island

Series consists of Colonial Office correspondence relating to the Colony of Vancouver Island. Correspondence is arranged chronologically in bound volumes.

Power of attorney and other material

Series consists of Power of attorney to George Simpson and Duncan Finlayson, 1847 and 1849; report on Champlain and St. Lawrence Railroad Company (printed), 1850.

Series consists of handwritten journals covering briefly Roberts time as a youth in Ireland, his work as a missionary in Upper Canada at the “Six Nations Indians’ parsonage,” Cayuga Mission, and his missionary work on Kuper Island. The predominant...

Colonial Office correspondence with regard to settlement of Vancouver Island The series consists of correspondence from Peter Skene Ogden at Fort Vancouver to W.F. Tolmie at Fort Nisqually, written between 1847 and 1848. Some of the letters are transcript copies only.

This series consists of published charts produced by the Hydrographic Office of the British Admiralty.Although the Admiralty Charts were designed to serve as navigational aids, they frequently contain extensive cultural and topographic information...

Records of the Oblates of Mary Immaculate. St. Paul's Province

Founded in 1816, the Oblate Missionaries of Mary Immaculate (O.M.I.) is a Roman Catholic order based in France. Missionaries from the Order first arrived in Canada in 1841 and arrived in Oregon Territory in 1847. They moved their missions to Bri...